Peace and Prosperity through Productivity

Reason magazine's Ronald Bailey has an insightful piece about the link between peace and prosperity and productivity that really highlights why the paternalistic, charity-based approach currently being applied to poorer nations and communities is not working.

Minneapolis—Productivity can save the planet and produce peace and prosperity for all. Productivity is the tool that can eliminate all of the scourges of humanity—poverty, hunger, disease and war. Norwegian-American economist and business consultant Tor Dahl passionately made this argument in his keynote presentation at the World Future Society's annual meeting. Dahl is the chairman emeritus of the World Confederation of Productivity Science. One must be on guard against the exaggerated claims of the mavens of any discipline for the significance of their field. Of course, mavens believe that what they do is vitally important, otherwise why would they do it? That said, Dahl was very persuasive.

What is productivity? Simply getting more output from the same or less input. Dahl showed in his talk the institutional context in which productivity improvement flourishes. His findings will gladden the heart of any libertarian, and anyone else who wants a prosperous future for the billions of people on this planet who are mired in poverty. He began by asking why South Asians and Cubans are more productive outside of India and Cuba? Why do Russians have the highest per capita income of any ethnic group in the U.S., but very low per capita income in Russia? Why are Mexicans five times more productive in the U.S. than in Mexico?

The answer is that productivity flourishes when people are free, safe, and justly treated. Dahl calls this the framework for prosperity. "This principle holds not only for nations, but for any organization or institution that seeks to unleash its potential to achieve improvement and growth," declared Dahl. As evidence for the salience of freedom, Dahl showed the correlation between the Index of Economic Freedom and each country's per capita gross domestic product (GDP). The Index of Economic Freedom encompasses trade freedom, investment freedom, freedom from corruption, and the protection of property rights. The top 10 countries' scores cluster around 80 on a 100 point scale. The U.S. is number four, after Hong Kong, Singapore, and Australia. The poorest countries are also the least free, e.g., Zimbabwe, Burma, Libya, Turkmenistan, and Chad. They generally scored in the 40s on the 100 point scale.

Dahl did a polynomial regression to see how prosperity correlates with freedom. He found that approximately 55 percent of prosperity (R2 = .55) can be attributed to the prevalence of economic freedom. 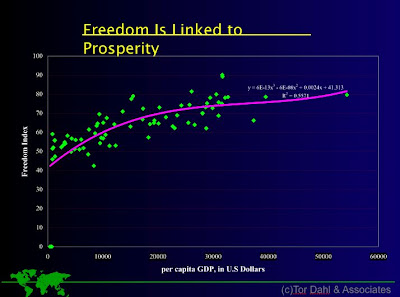 "The freer you are, the faster you grow," said Dahl. As a stand-in for safety, Dahl looked at lost years of life per 100,000 population due to hunger, disease and conflict in each country. He got an amazing R2 of .51, which he said means that about 51 percent of prosperity can be attributed to people living in safety. 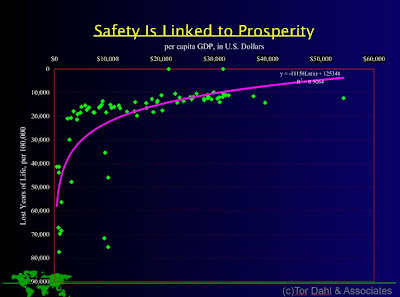 The safest countries included Iceland, Japan, Israel, Singapore, and Australia. The U.S. was number 31 on the list. And his final regression looked at how prosperity correlates with justice. Using a freedom from corruption index, Dahl got an R2 of .83, which he interpreted as meaning that approximately 83 percent the variation in prosperity across countries can be explained by good governance. 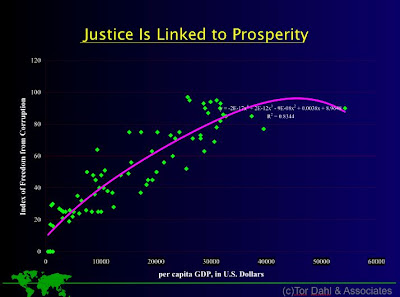 Dahl divides the economy into three sectors which he calls transformational, transactional, and the knowledge economy. Today in the U.S., about 10 percent of Americans work in transforming raw materials into finished goods and another 10 percent work in routine transactional jobs, e.g., bank tellers and grocery check-out personnel. This means that 80 percent of Americans are knowledge workers. Dahl then argues that there is no ceiling on the productivity of knowledge workers since knowledge is abundant, and not scarce.

This is an insight that Stanford University "New Growth" economist Paul Romer endorses. In addition, this means that future economic growth depends less and less on the amount of physical resources, and more on transforming those resources into high value products and services. Perhaps one way to think of it is to compare it to gourmet dining: The difference in the price of meal at Denny's and one at the French Laundry does not depend so much on the cost of the calories that go into the meals, but on the differential in the knowledge and artistry of the chefs. About 80 percent of wealth of the world turns out to be of this intangible sort that is embedded in human capital and well-functioning social institutions.

Take South Asians, Cubans, Russians or Mexicans, transplant them to the US and watch them blossom. Is there any better argument for democracy, free trade and globalisation?

The greatest threat to our way of life is the nanny state; the state that tells you that you have rights but not obligations you first need to meet in order to gain those rights.

Dahl's conclusions are mine own, but his method of reaching them will only appeal to those who already believe as we do.

First, there are problems with trying to graph any quantitatively mensurable item, such as per capita GDP, against something like "freedom." Freedom is important, even critical, but you can't put analytically defensible calipers on its quantity, except perhaps at the extremes of anarchy (100% free) and absolute totalitarianism (0% free). Apart from those poles, it's unlikely that any two persons would agree on the "percent free" of any polity. Even if we all agree on the intensive definition of political freedom -- the absence of coercion or constraint by any authority locally or topically recognized as legitimately empowered to coerce or constrain -- how does this certify a judgment that, say, a nation with legal-tender laws is 5% less free than a nation without them, or a nation with absolute freedom of speech is 20% more free than a nation with "hate crime" statutes that forbid one to say anything "offensive" to a protected minority?

Second, there's the problem of capital accumulated under conditions different from those of today. This is particularly visible in the United States, the most prosperous nation on Earth. A huge fraction of our capital was produced when the nation was far freer, in terms of aggregate governmental assertions of authority, than it is today. Capital amplifies the productivity of him who wields it; that's its definition. But how shall we assess the productivity of a slave harnessed to a machine designed or acquired by a free man of an earlier time? And to which era's account ought it to go?

Third, Dahl's sectors of production -- transformational, transactional, and knowledge -- are far too indistinct to withstand attacks on the inferences he draws on them. They bleed into one another, not merely at the edges but in common practice. For example, it's now generally agreed that the bulk of elementary and secondary education, and virtually all "higher" education, is economically irrelevant, and that the greater part of one's commercially relevant knowledge assets comes through working in one's chosen field -- "learning by doing." (A very good thing, when you reflect on the state of our educational institutions.) Alongside this, we have the cross-applications of these sectors, for example knowledge used to improve transformational efficiency, or transactional systems whose thrust is to lower the cost of acquiring knowledge; how are we to classify these?

In brief, a statistical approach to these things is too vulnerable to arguments over the precise meanings of its political terms, and the precise valuations given to political differences. Leftists and other freedom-hostile types would wave them aside as bogus, freely redefine their critical terms, and assert that "real" freedom is of the Rooseveltian variety: "freedom" from want and "freedom" from fear. In our battle for the minds of the uncommitted, their strokes would be at least as heavy as our own, since the average person of unformed political convictions is at least as concerned with his personal security, and that of his loved ones, as he is with more abstract questions of freedom and justice. Men have always been appallingly willing to countenance oppression and injustice if they thought they and theirs would "do alright" under it.

Funnily enough, I have a graph I've done up that plots freedom (communism - anarchy) against government size etc. Should be up this week.