"Lies, damned lies, and statistics" is part of a phrase attributed to the 19th Century British Prime Minister Benjamin Disraeli, among others, and later popularized in the United States by, among others, Mark Twain: "There are three kinds of lies: lies, damned lies, and statistics." The statement refers to the persuasive power of numbers, the use of statistics to bolster weak arguments, and the tendency of people to disparage statistics that do not support their positions. The phrase is not found in Disraeli's works nor is it known within his lifetime and for years afterward. Many coiners have been proposed. The most plausible, on current evidence, is Charles Wentworth Dilke (1843-1911).

How remarkable that in the 21st century a phrase that was coined before air travel, before radio, before telephones, before elevators and (gasp) before the Internet can be so applicable.

Health care is another. Have a look at the following from good.is: 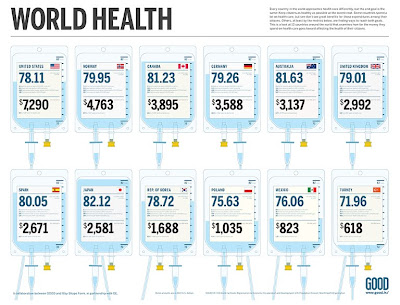 The 78.11 is life expectancy and $7,290 is the cost of health care. If you knew nothing else then you would think that Americans spend a lot of money to achieve ordinary outcomes. Zooming in on the graph gives: 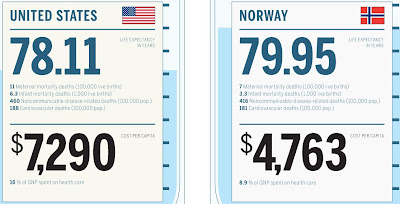 You see, nearly every country listed on the image leeches off of the innovation of the US health sector in order to provide their health outcomes. Take away the US and the cost to each nation would be much, much higher, as they would be forced to take on the R&D costs currently borne by the US.

Not that left wing politicians and their supporters will ever make that argument, of course, in spite of its truth.

Here is an inconvenient fact for people who believe the above represents the whole picture - if you are diagnosed with cancer, heart disease, diabetes and a whole host of other conditions you will live longer post-diagnosis in the US than anywhere else in the world.

The issue in the US is not quality of care but access to care, brought about completely by ridiculous government intervention in the market, which restricts access across state lines, as well as tying health care to employment.

There is another problem with the above image - it compares a nation of 300 million people with much smaller ones.

Norway has a population of under 5 million. Every other country on the image has a much larger population than Norway. The bigger question is how is it that Norway can have such poor outcomes compared to the rest of the countries listed?

Of course, the comparison of the US can only be valid when compared to the whole of the European Union (500 million) or the whole of South America (385 million). There are states of the US that outdo Norway, Canada, Germany or Australia. So what?

Speaking selfishly, I hope that the health care bill as proposed in the US is defeated, otherwise our healthcare costs here in Australia will start to increase, as they will in the rest of the world.

And another thing - if health care reform is so urgent then why won't it be implemented until 2013, after the next presidential election?

Email ThisBlogThis!Share to TwitterShare to FacebookShare to Pinterest
Labels: Health

You imply that Climate Models (Atmosphere/Ocean Global Circulation Models) are examples of lying with statistics. However AOGCMs aren't statistical models, they are ab initio/empirical physical models.

Do you understand the difference?

Do climate models include paramaterisation?

If so (which we both know they do) then what is parameterisation other than the statistical representation of e.g. the effect of clouds?

There's just one example for you to mull over.

Another key issue is how infant mortality rates are calculated. In the US, any baby born with any sign of life is registered as a live birth. Even the WHO, which is the source for such statistics, admits in a footnote that a number of European countries have far more 'flexible' standards for what constitutes a live birth.

Since the US has a formidable neo-natal practice, it is far more likely that some live births will end in death. In a great many countries, one would have to go a distance to find a neo-natal unit. There is virtually no hospital in the US...even in the smallest towns...that doesn't have such a unit.

I don't know what impact that would have on infant mortality statistics, but it would certainly distort them materially.

This would, of course, also impact life expectancy numbers.

Just about anyone who would like to check awesome and additionally eye-catching can get done for that reason just by best man louis vuitton replica sale fashions in the case of elegant garmets. Pebble Rebirth shorts really are amongst the leading beautiful jean fashions there exists. Individuals can be bought in a number of fashions and additionally lengths and widths consequently they are utilised by both women and men. Pebble Rebirth shorts had been round as news got around consequently they are fake louis vuitton outlet that should be all the best beautiful jean. You need to check awesome for established snug shorts which usually looks like these were created you will, looking into purchasing a two of Pebble Rebirth shorts. A different sort of outfit this really is respected as increasingly popular is normally fake louis vuitton sale outfit. Roar outfit exists located at particularly enhanced outlet stores is just for men of all ages, wives and additionally kids. The Roar outfit tier is normally milder previously is still carried just by recognized girls. Various teens in these days really are hopping over to all the fake chanel bags outfit trend truck and additionally getting into accessories this particular trend. Possessing beautiful outfit this may leading problem looking is really difficult. You've gotten simply a modest selection of outlet stores where you should head off to become Roar outfit and additionally Pebble fake chanel bags shorts. They are soaked are simply in a fabulous decide selection of outlet stores.