First, thanks to Tiger Woods:

What's in a word?

Well, for Internet searchers, many aren't quite sure.

When Tiger Woods apologized today for "transgressions" after Us Weekly posted a voice mail of the world's No. 1 golfer talking to an alleged mistress, confused readers flooded Google with searches of the 14-letter word in search for clarity.

Google Trends, which lists in real-time the fastest rising searches on Google, lists "transgressions" as No. 1.

The search engine gave the query its highest ranking: volcanic.

To help you out, I've reached over to the Merriam Webster's Collegiate Dictionary on my desk for the definition:

• an act, process, or instance of transgressing: as a: infringement or violation of law, command, or duty b: the spread of the sea over land areas and the consequent uncomfortable deposit of sediments on older rocks

(We're pretty sure he meant the first part.)

What has happened to the standard of education when people don't know what trangression means?

The next example comes from the world of cricket. Apparently, retired English captain Michael Vaughan has taken up art.

Vaughan, who led England to Ashes glory in 2005, has created a series of paintings by throwing paint-spattered cricket balls at canvasses, in a technique dubbed artballing.

The works -- with titles such as "Six!" and "Power Play" -- went on display Wednesday night at a gallery in London's upmarket department store Harrods.

"With my art it's been good to get away from cricket and switch off those thought processes required to captain at the highest level, the day-in day-out questioning of yourself and the team - the art is quite therapeutic," he said.

Vaughan, 35, who retired from professional cricket in June, admitted he first became interested in art when teammate Ashley Giles took him to trendy London galleries during rain-delayed Test matches.

"I tell people what I'm doing and they raise an eyebrow and say 'Oh, really?'. But then they see the finished works and it really takes them aback, which is great," the former batsman said.

Navratilova held an exhibition at Roland-Garros, home of the French Open Grand Slam tournament, in 2007 of her works produced by hitting balls soaked in paint against canvases, and bouncing them on canvases on the ground. 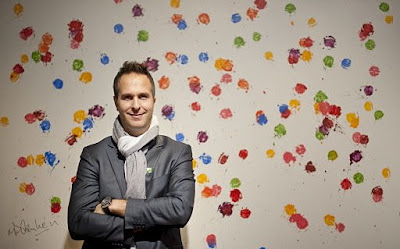 All that's missing is a government grant.

When bouncing painted balls against a canvas counts as art then there's nothing that doesn't.

In the bottom left (Vaughan's right) you can see that he signed the 'art', as well. Is he beyond embarrassment?

He's even got the fucking artiste scarf going. OMG what a stereotype.

As an artist who actually thinks about the images I make and has to teach in order to do so, people like this irritate the hell out of me. I see celebrities swanning about with apricot scarves listening to technojazz at receptions for their "art" while real artists are working at public schools trying to sell their legitimately good art for pennies on the dollar. What a crock.

Pretty funny for this blog to be moaning about the "collapse of standards" when it's chock full of the most scientifically ignorant, illogical and idiotically knee-jerk paranoic group-think I have ever read on the net, and given the quality of most of what passes for thinking on the net, that's a big achievement. Just have a go at stating one opinion without descending into spittle-mouthed abuse. Go on, give it a go.

Ha! Nice one, John. You obviously aren't a regular reader of this blog.

No, but I,ve seen enough to get a pretty good idea of the level of debate, e.g.; "Lying fucking scientist scum make me puke" You must be so proud to have fans like that advancing our knowledge. And what,s that ridiculous "cliomate watch" thing? What does it mean to confidently state " 0 deaths/damage from climate change this month? What does that actually mean? Imagine your contempt if a "fucking" scientist said something as obviously stupid as "there have been 79 deaths to to climate change this month"? Jesus Christ, it's enough to make you weep.

No comment, then. This site seems to ignore contrary opinion; like most political blog sites, it only exists to make like-minded people feel very pleased with their own opinions. One person says "Hey Guys, I reckoon all scientists are all a bunch of lying morons cos I don't like what they say, and I know what I'm talking about cos I once saw half a science programme on TV", then everyone else writes "Yeah, at last someone's talking sense".

Need to make up quotes that were never said, fudgie john? Making stuff up qualifies you to be a climate scientist.