These people are crazy

Add to the myriad of dire predictions of the consequences of climate change today's warning that the fish are going to go crazy.

Warmer ocean temperatures caused by global warming could cause sharks and other fish to become more aggressive, according to a new Australian study.

Research conducted by the University of New South Wales found that a slight lift in water temperatures — just two or three degrees — can cause some fish to become up to 30 times more aggressive than they normally would be.

The studies were conducted on young damsel fish, but head researcher Dr Peter Biro told ninemsn "he would be surprised" if sharks did not also undergo a similar transformation in warm water.

"I would imagine it ought to affect sharks ... We think it is linked to the metabolism of the fishes — it increases their need to feed," Dr Biro said.

The research involved putting the damsel fish in varying temperatures of water and placing other fish behind glass to see how they reacted.

Dr Biro said it was "obvious" the warmer water had an effect.

"Some fish would literally charge at the glass," he said.

"I'm quite confident that if the glass was not there they would have torn the other fish to shreds."

He predicted the increased aggression caused by climate change would cause some fish populations to dwindle, but it would eventually correct itself.

"I think in the short term we might see some effects," he said.

"But I think the animals will adapt, they won't all kill each other."

While some fish showed extreme aggressive reaction to the warm water, others did not react at all.

The majority of the fish tested appeared to be at least twice as aggressive in the warm water.

How could this test be carried out in anything that remotely resembles reality?

In the event that the oceans do heat up by 2-3C, which they show no signs of doing, then it'll take decades or, more likely, at least a century, as there's an enormous amount of heat required to do that.

So how did they undertake this test? Heat water up slowly over a week or two? No wonder the fish become pissed off - they're too bloody hot.

And what did they conduct this test on? A damsel fish.

This is a damsel fish: 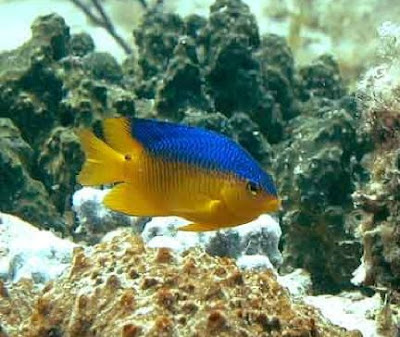 Apparently, after testing on this little feller they expect sharks to get just as grumpy. 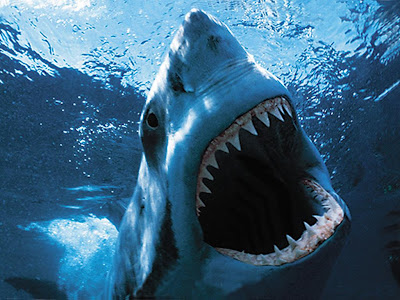 I dare them to try it on sharks.

Sharks move around between colder and warmer oceans but it doesn't seem to matter what temperature ocean they're in to munch up the ocassional human...

A bit fishy if you ask me.

Read about damsel fish, they're pretty feisty at a young age anyway...

I don't know, you just have to join the dots.

You deniers are just grasping at straws. When the seas rise by 100 metres, just you wait and see - thousands of really pissed off sharks are coming to get you!

Not only that, but the Great Barrier Reef will be bleached white, and icebergs will be smashing into islands.

What an idiotic bit of research. Some species are naturally more aggressive just as others are more passive. Put some bettas in a tank and they will go after each other regardless of the temperature. Warm water fish are more active in warm water. This is such non-scientific tripe, but the media loves it. God help us we are heading toward a type of Global idiocracy based on reality television and pop science.

As for Kaboom, when he ignores the lack of peer review and the cooking of raw data in order to assure an outcome, he supports disingenuous science at best. At worst, he supports a global fraud that will destroy nations.

This global warming scam is only just beginning to unwind.

This interesting article shows how key CO2 monitoring stations seem to have somehow been located very close to active volcanos (huge CO2 emmiters) and other suspect areas of higher than normal CO2.

You have to wonder how deep the scam goes or if it could be a coincidence of continual massive collective stupidity over a number of years.

...
Mauna Loa has been producing a readout which supports Manning's predetermined goal by showing steady growth in atmospheric CO2 concentrations since 1959. This record, highlighted in Al Gore's discredited movie An Inconvenient Truth, is known as the Keeling Curve. A graph of the curve is engraved on a bronze plaque mounted at the entrance to the Observatory’s Keeling Building, 10,000 feet above sea level on the rocky north flank of Mauna Loa. According to the Observatory website: "The undisturbed air, remote location, and minimal influences of vegetation and human activity at MLO are ideal for monitoring constituents in the atmosphere that can cause climate change."

For some reason, they fail to mention the erupting volcano next door.
...

Interesting article as for me. I'd like to read a bit more about this topic. Thank you for giving this data.
Sexy Lady
Escort London

Are you people all Creationists? I am- I'd be happy to shair some of my scientific findings with you. These communist so-called "scientists" must be defeated. God never mentions global warming in the Bible so anyone who says its true is lying scum. Anyway, science proves creationism is true, and that the earth is not getting hotter. Real science that is, not communist lies.