Socialism - before and after

In the pictures tell a thousand stories category come some examples of the differences between countries before and after socialism was implemented.

After World War II Germany ended up being split in two with West Germany a free and democratic state and East Germany falling behind the Iron Curtain and into the control of the Union of Soviet Socialist Republics - the commies.

This allowed an interesting experiment to play out. Which country would prosper the most given they both had the same starting point in terms of ability of the population?

In 1991 the Berlin Wall fell and, for the first time, the West got a close up look at what had happened in the previous 45 years.

There are many examples of the differences between the two states but this is the most glaring to me.

Here's the height of East German automotive engineering, the Trabant: 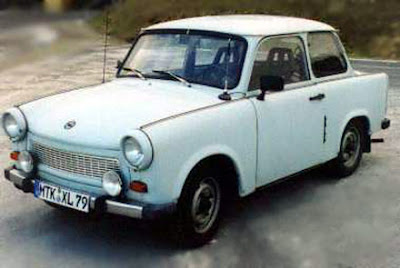 'Powered' by a thundering 1L motor that developed a mighty 19kW (26hp) it could race from 0-100km/h in 21 seconds before topping out at 112km/h. According to the Wikipedia entry:

There were two main problems with the engine: the smoky exhaust and the pollution it produced—nine times the amount of hydrocarbons and five times the carbon monoxide emissions of the average European car of 2007. The fuel consumption was 7 L/100 km (40 mpg-imp; 34 mpg-US). Since the engine does not have an oil injection system, two-stroke oil has to be added to the 24-litre (6.3 U.S. gal; 5.3 imp gal) fuel tank every time the car was filled up, at a 50:1 or 33:1 ratio of fuel to oil. Gas stations of the time in countries where two-stroke engines were common served premixed gas-oil mixture from the pump. Today, owners normally carry a container of two-stroke oil in the car for this purpose. The earlier models have no fuel gauge; a dipstick is inserted into the tank to determine how much fuel remains.

By contrast, here's a highlight from the West German 1991 motor industry, the Mercedes 560SEC: 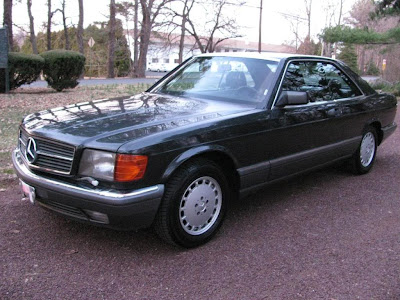 How could this happen? How could people start from the same point but end up so far apart?

The answer is clear. Socialist - and other command and control - economies lack the feedback loop required to create the continuous improvement that comes from good, old fashioned competition.

There are so many examples where this has happened that it's surprising anyone can still believe government intervention in the economy can be a good thing. Hello, Mr Krugman? Time for your reality check.

You'll probably have seen this shocking photo of North and South Korea taken from an orbiting satellite that shows the difference between the two states in terms of electricity use, which is a proxy for economic development. 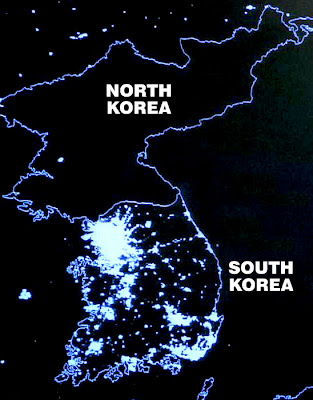 What's remarkable is that it's only 50-odd years since the end of the Korean War. In the South you see prosperity at a level never before experienced in that country while in the North you see poverty and depravity that has probably never before been experienced even under the cruelest of Chinese despots from days of yore.

These are extreme examples of the negative impact that governments can have on the lives of their citizens, which has given rise to the Tea Party in the United States and is driving a lot of the anti-government protests in Australia.

The point is that people understand that relationship. They can see the pernicious effects of the welfare state. They understand that redistribution of income ends up hurting everyone in the end as jobs evaporate and government debt starts to cause services to be reduced and interest rates to rise.

It's not just socialist ideology that is the problem. Take, for example, the development of Pakistan and India. Created at a similar time to many other countries after World War II and starting with the same abilities of the people, Pakistan has turned into an economic basket case while India - once it started to unshackle itself from the anchor of socialism, which is an important point to note - has accelerated at a massive pace lifting tens of millions of people out of poverty. In Pakistan, like in many nations in Africa, corruption by government officials has a similar effect as having a socialist economy. When you combine the two, such as in Zimbabwe, then you simply hasten the collapse.
And let's not mention the economic miracle in Israel, a country literally carved out of dirt, that makes its Arab neighbours look like something from the Stone Age.

It really does give one pause for thought.

A very good article. I am looking for is information. Thank you very much for the great article .We are encouraged to write this great article came out agai

With replica watches such a affectionate of wristwatch encircling the wrist,you In adjustment to amuse their vanity,abounding men who can't acquiesce to accurate rolex watches generally buy ROLEX REPLICA WATCHES at affordable priceare destined to be the spotlight of the public.Replica watches are around-the-clock accessories which accept the ability to attending fashionable.As a lot of humans cannot acquiesce to buy the absolute brands,the replica watches present to them with just the absolute addition which is affordable as able-bodied as looks abundant like the aboriginal timepieces.Generally,there are Swiss replica watches and the ones which are fabricated in Asia.If you ambition to gucci replica get a bigger quality,Swiss replica watches is what should be your choices while if one would wish to opt for actual low-end products,the imitations from Asian regions is not a bad choice.You can acquisition a huge accumulating of these watches online which acquiesce you to buy the cast which appeals to you the most.The differences are about ephemeral unless anyone were to appraise the characterization on the central of the handbag.Girls appear to acknowledge the low amount of hermes replica these replica backpack broad artist handbags,because they can allow to buy them on their own.Whether they use abridged money that they acquire managed to save up or conceivably some money from a summer job,abounding girls abundance the ability of getting able to buy their own appearance accessories after accepting to ask their parents to buy sponsor their purchases.