So how did my US election predictions turn out?

In April last year I wrote off the presidential chances of three high profile candidates - Hillary Clinton, John Edwards and John McCain - so I was right there.

Here's my map from October 19: 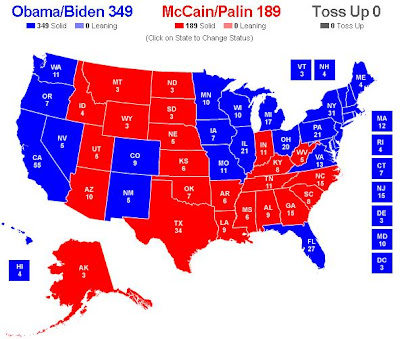 At the time I made the above prediction few pundits had Obama at as high as 350 electoral college votes though they did move that way in the last week of the campaign so I was ahead of the curve there and also correctly called Florida and Ohio.
I based my prediction on the betting markets. One thing about markets is that they reflect the real views of real people who are really putting real money where their mouths were.
So here's a tip from Jack Lacton for those who were not believing the opinion polls (though there were some legitimate reasons for skepticism) and that voters were not telling pollsters what their real intentions were:

Betting markets have no Bradley Effect

You didn't see me referencing the PUMA blogs such as Hillbuzz, which were trying to convince people that there would be a large number of pissed off Hillary supporters who were going to vote for John McCain.
Wasn't credible.
Didn't happen.
Congratulations have to go to Democratic Party supporters who deserve their moment of victory, a victory that was built on the back of what is probably the best run campaign in modern US election history.
May Obama surprise us all and be a very great president.
(Nothing Follows)
Posted by Jack Lacton on Wednesday, November 05, 2008

Yep. You were right and I was wrong. One must have a reason to hope. Unfortunately, McCain was a deeply flawed candidate. I didn't vote for him so much as I voted for Sarah and against The Dear Leader.

We're likely in for a rough ride. But in the odd chance that he can find the stones to govern from the center and stand up to the corrupt leftie mandarins of his own party, I wish him well.

It's the results that count.

eToro is the ultimate forex trading platform for new and advanced traders.