I wonder how long it will be before your average Australian voter wakes up to the fact that Kevin Rudd is the new Gough Whitlam?

Of course, there are millions of voters who either weren't born yet or politically aware during Whiltam's reign of chaos and who still think that Rudd is doing a good job by throwing tens of billions of dollars at the economy in order to stimulate it and get past the Global Financial Crisis.

Parenthetically, have you noticed that you never hear the government talk about Working Families anymore? It's all Global Financial Crisis.

Rudd is selling out Australia's future and when voters work it out there'll be carnage at the ballot box like there was when Whitlam was swept from office by Malcolm Fraser (who turned out to be a Grade A clot himself).

Do you remember Rudd's address to the ALP's National Conference?
Here's a reminder: 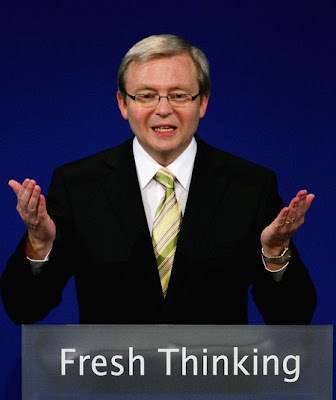 How fresh are the views of this bloke... 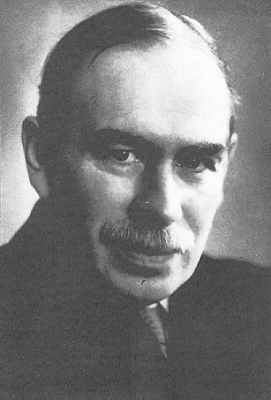 Apparently, fresh thinking means trying economic measures that have the same success as climate models - zero - in achieving their goals.
How the heck does spending billions on school infrastructure create sustainable jobs?
It doesn't, of course, which is the problem with Labor's bill.
It has very little stimulative effect.
The opposition leader, Malcolm Turnbull, who has squibbed it on climate change, at least has the common sense to block the bill from passing the Senate.
Whether the government can get the minor parties on board remains to be seen.

(Nothing Follows)
Posted by Jack Lacton on Wednesday, February 04, 2009

You all Down Under know you're considered one of the last refuges of economic and personal freedom for when Obamation collapses, right?

JackLac, Malcolm Turnbull appears to have grown a pair in the last week.

Imagine the Greens siding with the Wets in the Senate! Unbelievable, although we know exactly what the Green agenda is - PORK!

Although, in deference to our multicultural state, perhaps it should not be called PORK! any longer, as PORK! could be offensive to some political or religious systems.

As I say, the Green agenda is PORK! They just want to make sure that most of the filthy lucre of $42 Billion (say it quickly, and just don't think about it) is directed towards Green projects and belief systems.

Turnbull, a laughable joke of an AGW believer, has been in the unfortunate position of being a "Mini Me" to Krudd for the last year.

I suspect that the other AGW believing dickhead, Peter Costello, has raised his ugly head in the shadow Cabinet.

This country is fucked. Roger, you are out of luck....