It seems that whenever a natural disaster occurs anywhere in the world it is only a matter of time before some zealot concludes that the cause is global warming.

Thus, it has been so with the Victorian bushfire disaster in which more than 300 people may have lost their lives.

Tim Blair has being skewering those who are blaming global warming:

Just as they used Hurricane Katrina, warmenists are preparing to use Australia’s fires:

Thanks for the kind thoughts, Karen.

UPDATE. It’s on. A warmenist swarm commences at the ABC, Crikey and the Age, where Freya Mathews—a research fellow in the philosophy department at La Trobe University, if you don’t mind—writes:
Congratulations, geniuses. You’ve successfully predicted bushfires in Australia during the Australian bushfire season.

I have pointed out before that there is a deep immorality behind the accusation that mankind's CO2 emissions are responsible, or will be responsible, for all sorts of disasters.

“Global warming is predicted to make this sort of event happen 25 per cent, 50 per cent more,” he told Sky News.

“It’s a sobering reminder of the need for this nation and the whole world to act and put at a priority our need to tackle climate change.”

At the time he made the statement people were being killed by the fires.

It's hard to imagine how one could plumb lower depths than that.

However, it's almost possible, as this disgusting cartoon in Indonesia's Jakarta Post proves: 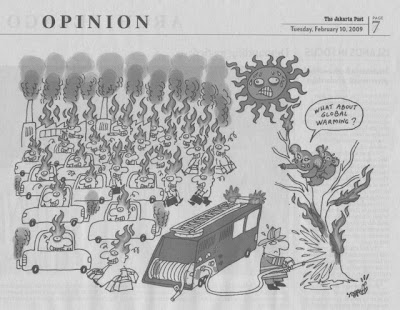 (Nothing Follows)
Posted by Jack Lacton on Tuesday, February 10, 2009

You think that identifying the cause of a disaster, and working towards removing that cause and avoiding future disasters, is somehow 'tasteless'? What a very warped attitude.

We know what the cause of the disaster is - too much fuel.

Forests should have no more than 8t/hectare while ours are allowed to build up to between 30-100 because environmentalists stop people from taking the action needed.

Now we have 300 people dead and millions of animals gone because of it.

SE Australia is the most fire prone area of the world. Disasters like this happen every 20 years.

So-called global warming has nothing to do with it.

Only an ignoramus would think it does.

Only an ignoramus could fail to notice the record-breaking heatwave happening at exactly the same time.

It could be 100C and if there was no fuel in the forest then there wouldn't be a problem.

Even the Climate Lemmings at Hadley have complained today about people linking climate change to extreme events such as bushfires.

And the seven year drought - that obviously wouldn't have anything to do with anything, would it?

Why are you so desperate not to see what's blindingly obvious?

Australia is a land of droughts. Had them for millions of years. That's why we have so much desert.

Of course, if you understood how El Nino affected Australia then you wouldn't make such a dopey comment. It's pissing with rain up north and dry, as usual, down south.

And have you spoken to your superiors? When can I have my 2008 Fudgie back?

The red centre, land of droughts, yes. Victoria, not really.

Most people realise from a very young ago that dry=flammable, and are thus not offended by the notion that unusually dry conditions might have something to do with a subsequent fire.

Victoria is the most fire prone place on the planet. It's ALWAYS dry. That's why there are so many bloody firetrucks and firemen there.

Which Victoria are you talking about? The real one, which is the second-wettest state in Australia, or one you've dreamed up?

You really aren't very smart, are you?

Have a look at the history of bushfires in Victoria and you'll see a pattern which has just been repeated again. No clearing, fuel load builds up, huge fire, massive damage, death.

You thick fuck. "It's ALWAYS dry" was an really retarded thing to say Victoria is the wettest state after Tasmania. What kind of dickhead doesn't even believe simple facts like that?

It's ALWAYS dry obviously refers to fire season, which anyone with even the slightest hint of intellectual capacity would understand.

Look up 'always' in the dictionary, you twat.

Why won't you respond to my question about getting my 2008 Fudgie back?

And you still haven't explained how statistics are used in climate models.

Your silence damns you.