Somehow or other, your erstwhile correspondent Jack Lacton has managed to get himself banned by Little Green Footballs.

For those of you who are regular readers of Charles' site and mine this might come as somewhat of a surprise given how close our views are on most topics.

Dennis Prager describes LGF as 'one of the most important sites on the web' and I agree. Charles' exposure of the Dan Rather phony Bush document and doctored Israeli missiles photo were extremely important. Hopefully, his vigilance can expose more fraud in the future.

Charles has a pretty much fair minded view of all topics and calls a spade a spade even if it's against his own side, which I also do, as for example in my recent post on the Australian opposition's emissions trading policy.

He and I agree on about 90% of topics including that Pam Gellar is a nut, as is alternative health 'expert' Jenny McCarthy. The nirthers are simply 9/11 troofers rebadged and the Republican cause is not helped by having people like Judge Andrew Napolitano and Glenn Beck feature so prominently on Fox. He also has a lot of fun with the Ron Paul supporters, as do I.

Charles understands that creationists dressed up in the Intelligent Design cloak are not only a threat to the Republican Party but also to Christian values in general, as when people reject ID they also reject Christianity, values and all. This will come at a massive cost to a fabric of society that is already being damaged by a myriad of left wing, activist groups.

We disagree on Climate Change. Charles seems to accept the so called 'consensus', which I put down to him not having delved into the issue in any great detail. He even provided a link to the anti-science climateskeptics propaganda site recently, which seeks to disprove all of the arguments put forward by we supposed deniers. He might like to spend some time at WUWT and Climateaudit to get a real look at the fraud behind the 'consensus'.

The thing that I think I got banned for was giving this post a minus on the LGF post rating: 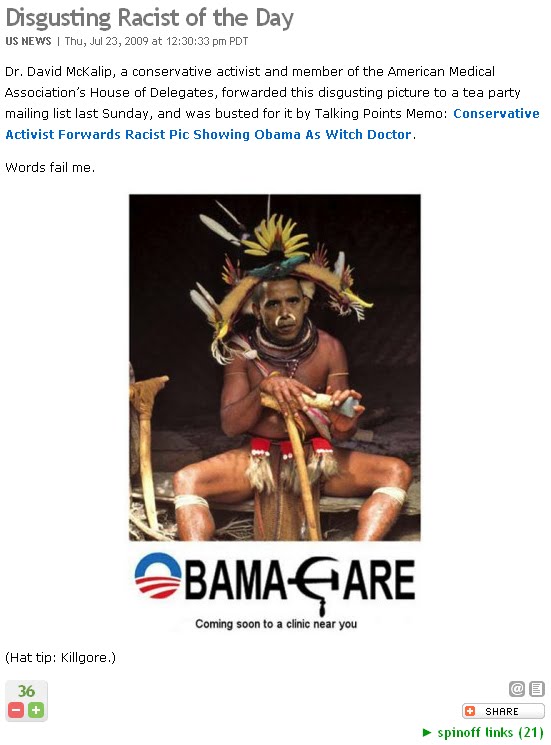 Is this photo funny?

But is it racist?

Here's where I thought that Charles had gone too far and why I gave it the thumbs down.

This is only racist if you only see President Obama as a black man and not as a regular human being.

Consider, is the following picture racist? 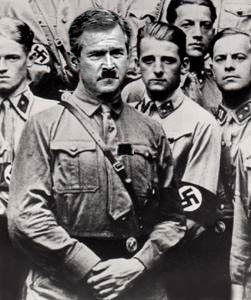 If not then why not if you're using the same standard as the Obama picture?

Hitler is one of the most evil people to ever walk the earth. He was a white man. Why isn't it racist to put Bush's head on his body?

The answer is that his race had nothing to do with it.

The comparison is with the evil and not with the race.

The Obama photo comparison is with witch doctor-ism, not the fact that the witch doctor is black.

So, anyhoo, banned by LGF.

I used to think it was just the foul mouthed left and over zealous Ron Paulians that managed to get themselves banned. Maybe Charles thinks I'm one of them or part of the Gellar, Belien, Spencer unhinged crowd?

I still visit LGF every day and suggest you do also. Prager is right about it being one of the most important sites on the web. It's just a shame that I can't post comments or articles there anymore.

What took so long? Join the club!
You're in good company!

I think I was banned for putting up a link against MMGW.

I hardly ever posted there anyway.
If it weren't for the link viewer no one would bother going to the site,IMHO.
Tundra Tabloids has an excellent photo shop of the most "distinguished bannees".

There's even a blog where you can register yor name as a "bannee" but I forgot what it's called.

Don't be silly. Of COURSE the witch-doctor photograph is racist, because as you well know, at least 9 out of 10 witch-doctors are of dusky epidermal complexion.

The duskiness of the witch-doctor is at the core of the "joke", and the corollary you make between Bush=Hitler reinforces the concept of evil, and with your pathetic excuses, you are just painting Obama black .....Jesus, did I just say that?