It's all George Bush's fault

This really is an awesome dissection of the Obama administration's continually pinning the blame for their actions on George W Bush.

Chuck Green is a lifelong lefty and registered Democrat. 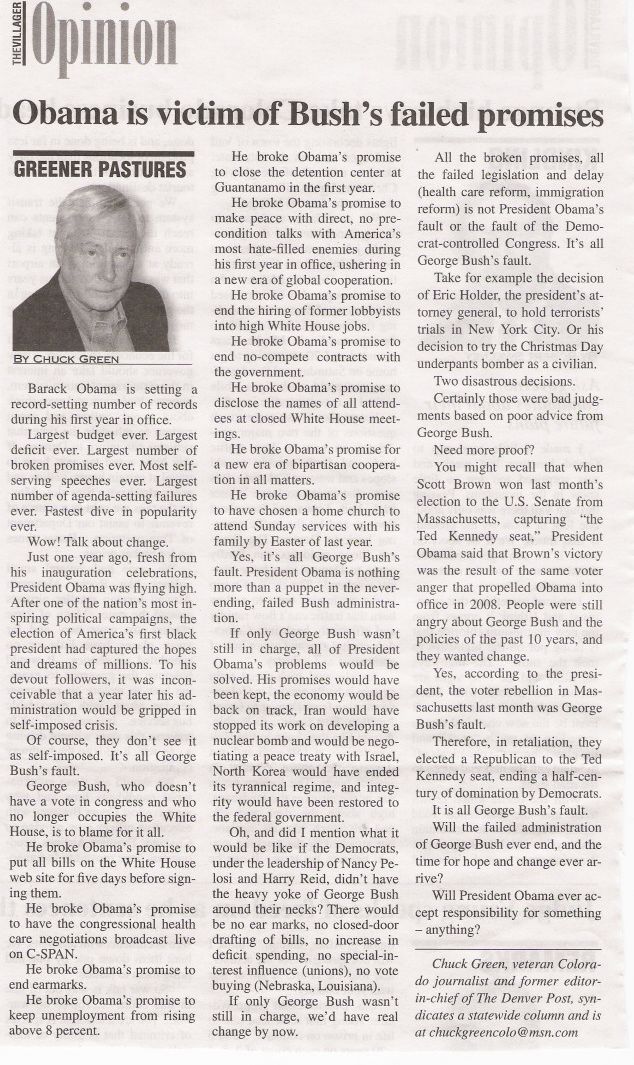 When people like Green are sick of the spin then it spells trouble for the Democrats, as where are the Independents going to be?

Bush has remained relatively silent on all issues refraining from public commentary even when given the chance. Obama on the other hand, never misses a chance to blame Bush, even though the last two precipitous Wall Street drops have happened after Obama opened his mouth. BTW, where's the statement regarding the unprovoked attack on a South Korean boat by North Korea? Obama hides, obsfucates and lies outright. I can't wait for his "reign" to be OVER.

Never in our lifetime have we endured a president whose governing style is more suited to kicking the dog than to creating a collaborative environment for solving problems.

Our Savior has routinely pitted groups of Americans against other Americans. He couldn't be more divisive if he were Perez Hilton or Allan Grayson.

Until we can send him back to the southside of Chicago, we are destined for decay, decline and rot.

In a whimisical mood, I posted this response to someone who asked what Obama's Plan A might be....I thought you would enjoy it.

I love that Obama climbs the pulpit with claims that he's "been on this since Day One." Even his press secretary was quoted on the third day as "not having done anything yet."
Plan A was evidently to blame everything on BP.
Plan B was to blame Bush.
Plan C was to blame the Corps of engineers (just out of habit)
Plan D was to blame bureaucratic snafus (which is pretty much like blaming himeself....)
Plan E was to blame Bush.
Plan F was to allow the oil to spew and drive up gas prices to European levels (in spite of the highest domestic storage since 1970)
Plan G was to blame BP.
Plan H was to blame Cheney and Halliburton.
Plan I was to sit and spin around in the chair behind the desk in the Oval Office.
Plan J was to ignore Jindal's attempt to save the marshes for two weeks by holding up permits because he's an evil Republican that doesn't agree with the DNC.
Plan K was to allow amnesty of all illegal immigrants.
Plan L was to take photos with the US soccer team
Plan M was to blame Bush.
Plan N was to stuff the spewing well with Napolitiano (it's the most she's ever done for the environment....)
Plan O was to sit around and hope that Ayers came through with a plan....No? Tooo bad.
Plan P was to throw Napolitano under the bus. But it must be a clean fuel bus.....
Plan Q was to abolish Don't Ask/Don't Tell
Plan R was to outlaw Rush Limbaugh
Plan S was to blame Bush.
Plan T was to blame the Tea Partyers for their racist attack on the environment (the media will eat this one up....)
Plan U was to send illegal immigrants one mile under the sea to work for minimum wage sealing the plug.
Plan V was to have Revs. Wright, Sharpton and Jackson pray for a miracle.
Plan W was to have Simon Cowell scathingly criticize BP on television.
Plan X was to blame Bush
Plan Y-There is NO PLAN Y
Plan Z was to create a diversionary crisis and hope nobody along the Gulf notices how their sea water has changed from clear to molasses.

The man rose up never having taken the blame for anything and now he's in a position where things are going wrong and he can't handle it.

It will run iOS and more specifically, it will run iOS 9. We’ve started to hear a whole lot about iOS 9 in the days leading up to its launch on June 8th at WWDC and it’s looking like it will be similar to Android M.

The heir of the Samsung business group made a deep bow in apology as criticism mounts on a Samsung hospital for its role in spreading the Middle East respiratory syndrome.
His father Lee Kun-hee, 73, chairman at Samsung Electronics Co., remains hospitalized at Samsung Medical Center since suffering a heart attack in May last year.