The left's score on Economics 101 - FAIL

Every so often a study comes along that so profoundly confirms common sense and the real world that it takes one's breath away.

Zeljka Buturovic and Daniel Klein of Econ Journal Watch will make no friends on the left with the publication of the results of a 2008 Zogby poll on 'economic enlightenment'.

From Klein's article in the Wall Street Journal:

Who is better informed about the policy choices facing the country—liberals, conservatives or libertarians? According to a Zogby International survey that I write about in the May issue of Econ Journal Watch, the answer is unequivocal: The left flunks Econ 101.

Rather than focusing on whether respondents answered a question correctly, we instead looked at whether they answered incorrectly. A response was counted as incorrect only if it was flatly unenlightened.

Consider one of the economic propositions in the December 2008 poll: "Restrictions on housing development make housing less affordable." People were asked if they: 1) strongly agree; 2) somewhat agree; 3) somewhat disagree; 4) strongly disagree; 5) are not sure.

Basic economics acknowledges that whatever redeeming features a restriction may have, it increases the cost of production and exchange, making goods and services less affordable. There may be exceptions to the general case, but they would be atypical.

Therefore, we counted as incorrect responses of "somewhat disagree" and "strongly disagree." This treatment gives leeway for those who think the question is ambiguous or half right and half wrong. They would likely answer "not sure," which we do not count as incorrect.

1) Mandatory licensing of professional services increases the prices of those services
2) Overall, the standard of living is higher today than it was 30 years ago
3) Rent control leads to housing shortages
4) A company with the largest market share is a monopoly
5) Third World workers working for American companies overseas are being exploited
6) Free trade leads to unemployment
7) Minimum wage laws raise unemployment
8) Restrictions on housing development make housing less affordable

Americans in the first three categories do reasonably well. But the left has trouble squaring economic thinking with their political psychology, morals and aesthetics.

To be sure, none of the eight questions specifically challenge the political sensibilities of conservatives and libertarians. Still, not all of the eight questions are tied directly to left-wing concerns about inequality and redistribution. In particular, the questions about mandatory licensing, the standard of living, the definition of monopoly, and free trade do not specifically challenge leftist sensibilities.

Adam Smith described political economy as "a branch of the science of a statesman or legislator." Governmental power joined with wrongheadedness is something terrible, but all too common. Realizing that many of our leaders and their constituents are economically unenlightened sheds light on the troubles that surround us.

We all have good friends on the left, people that we love, like and respect for their decency and humanity. However, we all know that when it comes to matters of economics they're dim bulbs. Their views are not only not part of the solution to the world's problems they are the root cause of most of the issues we face today. Not that the left would ever admit to that basic truth. As Dennis Prager likes to say, being on the left means never having to say you're sorry.

The full study is available here and makes great reading.

There are some interesting tables in the study. Firstly, correlation between education level and response (and they give some reasons for the results): 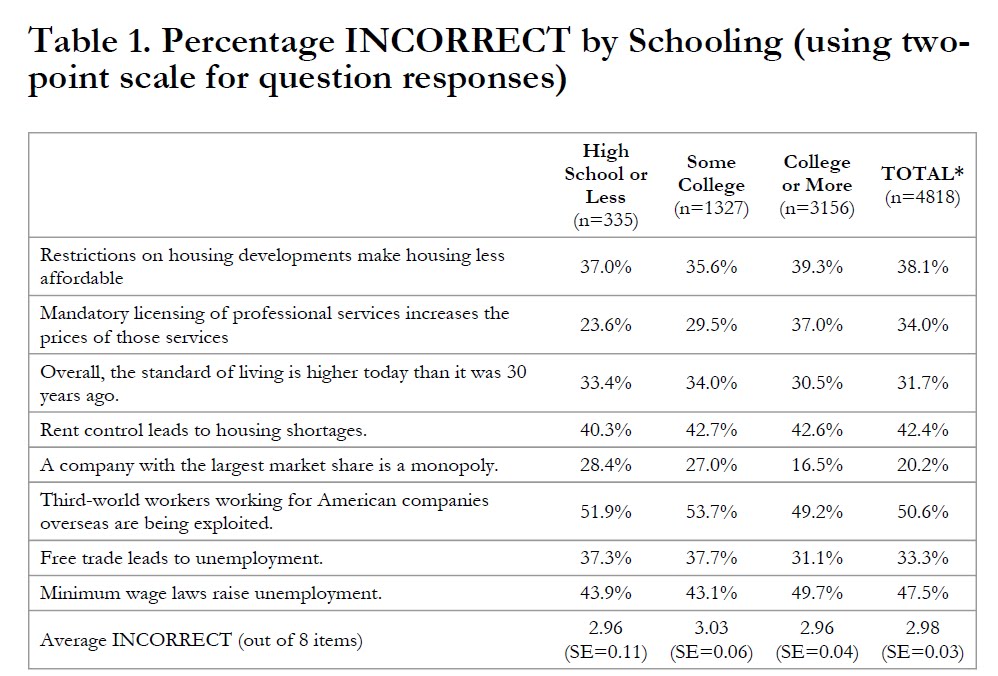 Here's the most amusing table in the whole study: 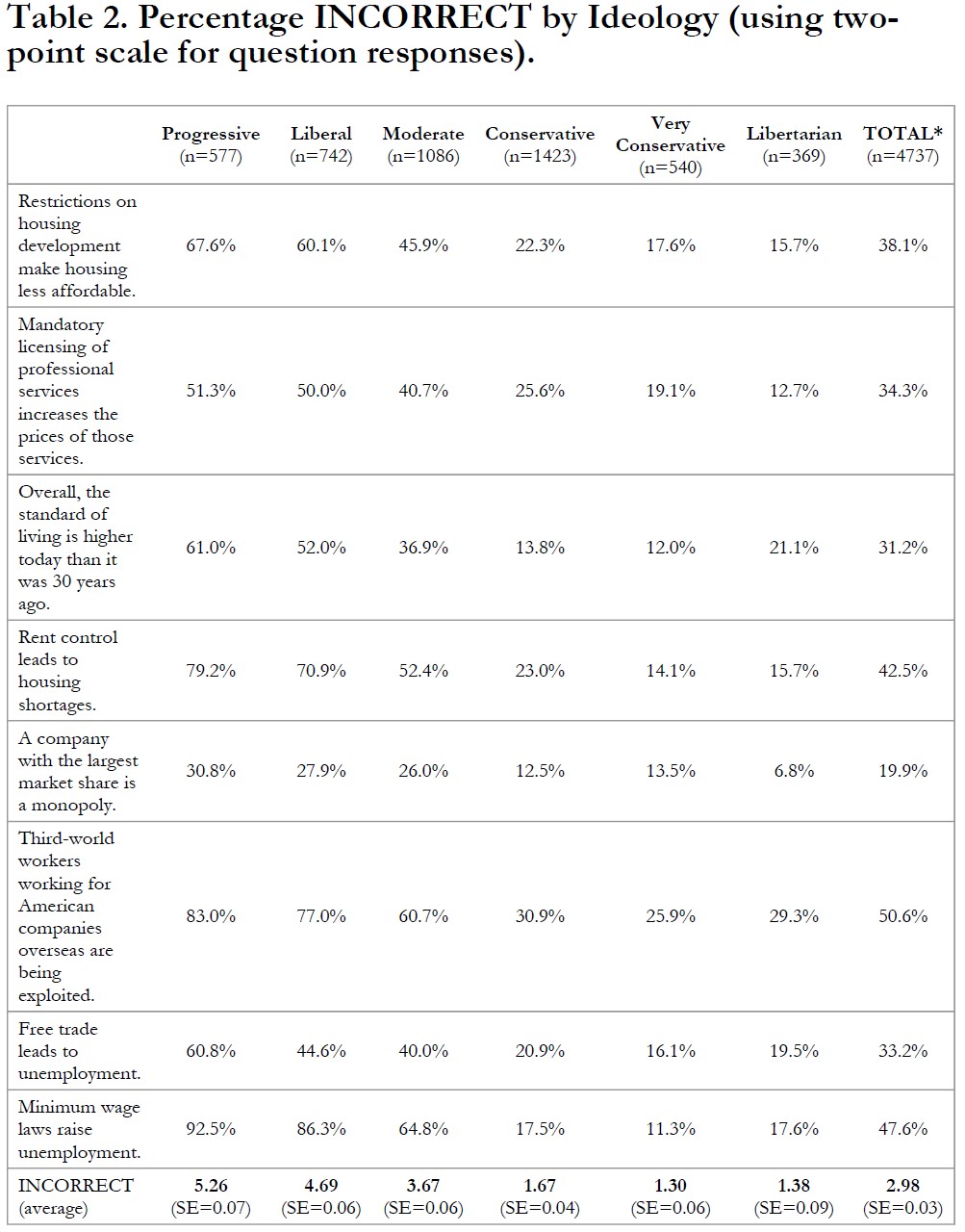 I must admit that I am truly astonished by the disparity in understanding of economics between the left and right. Given I got all 8 correct - they're hardly difficult - I also admit to being a bit surprised that the results weren't a lot better across all groups.

Naturally, the left will deal with this study in its usual manner: criticise the qualifications of those undertaking the research; impugn their motives for doing so; and accuse them of being in the pay of Big Left Wing Enemy du Jour. So much easier than refuting the results.

Seriously, though, wouldn't it be great if 16 year olds were taught the basics of economics so that they could answer all of these questions correctly? Perhaps the next generation of politicians would be more careful with the nation's economy than the current lot of left wing incompetents.

As an aside, it's ironic that in the West left wing governments are only ever elected when they campaign on conservative, 'responsible' economic grounds when the reality is that they really don't understand economics at all well. Once they're in power, however, the inner Keynesian pops out, they spend whatever surpluses the previous government has left and then make a good, solid attempt to spend the wealth of the next generation, and the one after that, before being turfed out amidst massive financial upheaval, as has just happened in the UK.

I'll have another post on why 2010 will be marked down in history as one of the most important years in modern history. Needless to say, ignorance of economics will be a major theme.

The point is well-taken, and I wish people on the left were better at economics. But this study is deeply flawed, and the conclusion that the left is worse at economics than the right does not, I repeat, does not follow from the findings of this study. The reason for this is that the questions were deliberately selected to produce these results.

I'll let alone the fact that Buturovic and Klein chose the fuzzy "enlightened-unenlightened" measure rather than "correct-incorrect". All the questions but two deal with fairly incontrovertible findings in economics, so it can reasonably be said that there is a right and wrong answer to each (the exceptions are the notion that free trade does not increase unemployment, which is far from uncontroversial, and the question of exploitation of workers in third world countries, which is a question of ethics and not economics, and thus misused in this study; but the disparity in answers is greater than two, so I'll ignore it for the purposes of this critique). Good enough so far. The problem is that these questions all are all about either the positive effects of policies that the left typically opposes, or negative consequences of policies that the left typically supports.

Of course, this does not excuse economic ignorance, but it does call into serious question the study's conclusions. We know well enough that people tend to be biased toward their team. So let's say I'm an economically ignorant leftist approaching the question of licensing professional services. Either for moral reasons or in support of my party, I favor licensing. This bias will cause me to favor the hypothesis that licensing decreases service prices. By the same token, if I am an economically ignorant rightist, and oppose licensing for moral or political reasons, I will assume the worst about licensing. The problem is that, because the selected questions were uniformly skewed in the way I described, left-wing bias will consistently lead to the wrong answer, while right-wing bias will consistently lead to the right answer.

A better study would include questions that an economically ignorant respondent with a right-wing bias would tend to get wrong--questions like, "do tax cuts lead to greater tax revenue?"; "do free markets fail?"; "are true costs always accurately reflected in prices?"; "do free markets provide the best outcome for everyone?"; et c. While this does not completely eliminate the effect of respondent biases, such a study would provide a far more accurate picture of the situation. I suspect it would reveal significant economic ignorance in both the right and the left.

From where does such bias emanate if not from the study, wisdom and understanding of the individual in forming their political views?

Your thesis seems to be that each person's political persuasion is somehow marked out for them in advance, that they have no control over it and therefore the reality that the right understands economics better than the left is a 'fluke' rather than empirical fact.

"From where does such bias emanate if not from the study, wisdom and understanding of the individual in forming their political views?"

This ignores the actual messy, complicated way that people come to political beliefs in practice. Your race, social class, or your parents' political orientation are going to have a great effect on what you believe. And then there are plenty of non-economic issues that might cause you to move right or left. In the United States, for instance, a party might attract many voters primarily on culture war issues, which up until recently barely had an economic dimension at all. You might choose the right or the left because of their stance on feminism, say, or the role of religion in the country. But when you pick a side, there's a whole host of other positions that people take, because that's how ingroup-outgroup mentality works. If you are a member of the right or the left and you are ignorant about economic issues, chances are you're just going to subscribe to whatever your party subscribes to.

This study uncovers ignorance on the left, and I think that is pretty indisputable: getting one of those questions wrong (except for the two that I don't believe are valid) means that you are ignorant about the subject of the question. But what you have to ask yourself is, what does getting the question right mean? In a less politically charged test, someone who doesn't know the answer might pick at random, in which case people who are ignorant have a 50% chance of getting the right answer, thus creating a whole bunch of false positives.

But this is a politically charged test, and people are not going to choose at random in ignorance. Those on the left chose according to the particular economic prejudices on the left--pro-regulation, anti-corporate, pro-worker, etc. There's a strong indication that they have a bias, because they got those questions consistently wrong.

You can't say the inverse for the respondents on the right, however, because these particular questions favor the economic biases on the right: pro-market, pro-free-trade, anti-regulation, pro-business, etc. So a biased, ignorant person on the right is likely to get the correct answers to all of the questions!

You might say that this just means that the right, as a whole, tends to be more correct on economics. But all the study shows is that this is the case for these particular questions. As I said in my earlier post, if you designed such a study where right-wing bias would consistently produce wrong, rather than right, answers, I suspect the results would be very different, and possibly reversed.

Economics in its pure form is theoretical in nature. It is only in the real world application of the theories that we get feedback on what works and what does not. We have highly placed academics who are simply playing with our national economy as if it is some sort of experiment. They do not seem to care about the impact other than in the most remote and detached observational way. In application, the mechanisms used by this government in its attempt to acquire power over every single industry have only succeeded in shrinking profits and the offshoot of that is less jobs, less tax revenue and lower stock markets. Is it any wonder that Americans are ready for this gang in the White House to go?