Australia's public broadcaster, the ABC, last night demonstrated exactly how far out of touch it is with community attitudes in its Media Watch program.

Presented by the remarkably over rated Monica Attard (how did she win those Walkley Awards and OAM?), Media Watch is a program that is meant to take a fair and balanced view to exposing media transgressions from the previous week. Of course, the ABC is like the BBC and PBS, all of whom don't actually know where the political centre is so 'fair and balanced' has a definite left wing tilt to it, as exampled by its rush to defend anything that is at odds with the socialist institution of political correctness. In its defence it has taken aim at the ABC itself when it has made a glaring mistake.

Media Watch started in 1989 with the acerbic and entertaining Stuart Littlemore (a Sydney QC) that gave the program a strong following in his 7-8 years as presenter. After his departure, Richard Ackland and Paul Barry did acceptable jobs hosting the show before the ABC really hit rock bottom by putting socialist hack David Marr and then perennially bitchy Liz Jackson (what is that woman's problem?) out front. Under Marr and Jackson the show lost any remaining lustre and became an irrelevance for most people. Monica Attard took over last year and has failed to provide the spark required to propel the show back to anything resembling mandatory viewing, as it was in days of yore.

Last night was the first time I'd caught any of the program for a while (and only because shows on other stations were behind schedule) and I was struck by the bias shown, especially in regards to the segment on readers' comments posted on online, media run blogs.

Specifically, Media Watch took aim at its long time enemy, The Daily Telegraph, whose policy of letting nearly anything be posted on its blogs was used to demonstrate that it supports racism and bigotry. On the way through, Attard also had a swipe at popular Australian blogger Tim Blair (disclosure: I am a member of that site and have posted heaps of comments).

In order to make their point, Media Watch used stories about a pub wanting to ban Arab and Aboriginal patrons because they made too much trouble, Anthony Mundine's assertion that the Australian Rugby League is racist and Muslim cabbies not picking up passengers with guide dogs.

The fact that most people agree that pubs should be able to ban troublemakers on the grounds of ethnicity (after all, the Peel Hotel in Melbourne recently won the right to ban straights due to the fact that they caused too much trouble for their gay patrons) and that even the ninemsn online poll was 2:1 against Anthony Mundine's position that the Australian Rugby League is racist until some poll stuffing went on to even up the numbers demonstrate how out of touch with the ordinary folk the ABC has become, which is ironic as it's the ordinary bloke that has to pay for the place.

Let's have a look at the Tim Blair segment, sourced from the online transcript:

It's not just newspaper and online editors who're prepared to tolerate cyber-racism in the name of free speech.

He allowed this vicious discussion about Muslim taxi drivers supposedly knocking back passengers with guide dogs. 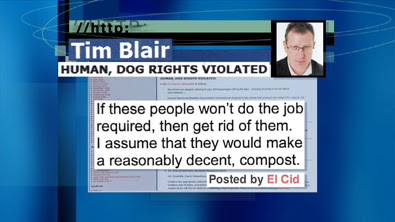 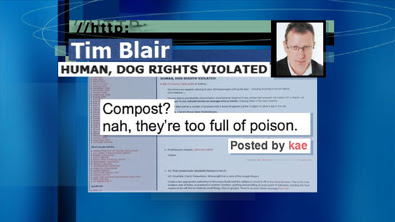 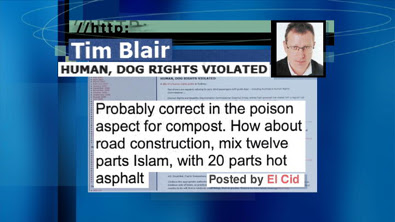 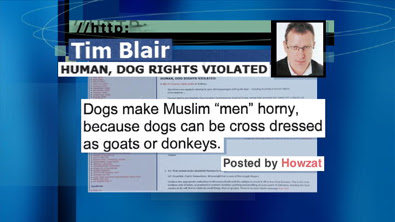 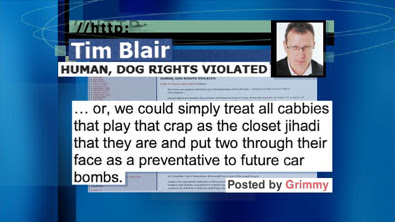 The ABC is being deliberately dishonest in its introduction here by using the word 'supposedly'. There is no supposedly about it, as has been widely reported. Muslim taxi drivers don't pick up passengers with guide dogs (I seem to remember one of the current affairs shows doing a story that demonstrated the fact), driving off when they see the dog or telling passengers they can't get in.

The situation follows on from Muslim taxi drivers at Minnesota airport after they repeatedly (hundreds of times per month) refused fares because passengers were carrying alcohol, a position that led to authorities forcing them to do so.

Furthermore, the ABC's assertion that this is a 'vicious discussion' proves they're away with the political correctness fairies. If they really wanted to report on blogs' vicious discussions then they'd wander over to some of the left wing variety and have a look at any posts about Israel, or John Howard.

But that's not the ABC's agenda.

El Cid's (an American) original point is correct. If they won't do the job then get rid of them. Society can't function if people impose their views on others. If Muslim cabbies won't pick up people with guide dogs or alcohol then what's next? Catholic cabbies won't take you to an abortion clinic? Carlton supporting cabbies won't pick up anyone wearing a Collingwood jumper? Devout Christian postal workers won't deliver Playboy? Catholic pharmacists won't dispense the pill or condoms?

If the ABC had spent any time at Tim Blair's blog then they would know that it's made up predominately of fair-minded people with strong pluralistic attitudes. That this is the worst Media Watch could find (given how old the story is) on Blair's blog supports this fact. The posts about compost above are what is generally referred to as a joke and the line about dressing up dogs as goats or donkeys is no different to making jokes about New Zealanders and sheep (though nowhere near as funny).

What the ABC doesn't understand is that a group of people from outside of Australia's cultural norm are unilaterally imposing their totalitarian, backwards ideology on the rest of us.

Fair minded Australians reject this fact. We are a fair minded society and we know when we're being taken for a ride at which point we call a spade a bloody shovel and fight back. Such was the case with illegal boat people and it's no different for Muslim cabbies.

The ABC clearly wants to stifle any debate about problems caused by Australia's now failing multicultural policy by defining those that have an opinion, let alone actually do anything about it, as racist.

By choosing this particular subject and taking aim at its political enemies the ABC provides moral support to wrongdoers and those with totalitarian agendas, and demonstrates how out of touch with the common folk they really are.

It seems that Media Watch itself is prone to letting racist comments through (thanks Dan Lewis). Here's one, ironically, commenting on the Media Watch segment from last night.

The only understanding I can make is that MediaWatch carries the torch for Globalism and maybe even Zionist groups as they are known to push Hate Speech laws so they can't be questioned themselves in crime. ABC is starting to show a disproportionate number of Jews in the places of power in the ABC. 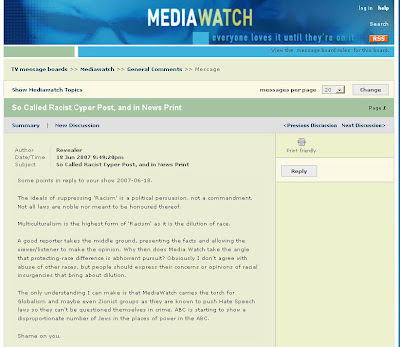 And of course Media Watch deliberately ignored the reams of anti semitic, anti white and anti American bile that gets posted on Australian websites every day. Its certainly not difficult to find. Can you say Agenda? Its time to privatise the ABC dammit.

Actually, there have been stories in the US press about Christian pharmacists who refuse to dispense the "morning after" pill, because it is supposedly the same as participating in an abortion. I'm as much against this kind of thing as I am against Muslim cab drivers refusing service to a blind person with a guide dog. If it is against your religion to serve the public in a job that might put you in such a position, then you don't need to be doing that particular job.