Check out the following graph of the change in US budget expenditure proportion from 1968 to 2008: 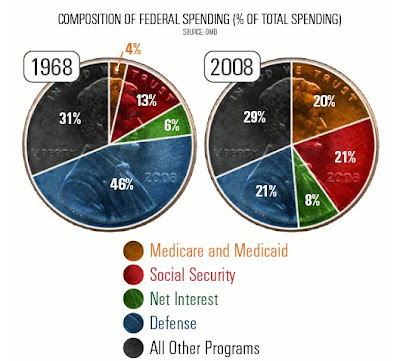 The end of the Vietnam War in 1975 contributed to a significant reduction in military spending and that money has largely been spent in Medicare/Medicaid and Social Security programs. Reagan increased military spending in an effort to finish off the Soviet Union. Bush 41 reduced spending and then Clinton really took a sword to it, which has left the US military less able to deal with the threats the US faces around the world than previously. Even with Bush 43's adventures into the Middle East it's only gone up around 1-2% of budget. It is worth noting that the Obama budget increases military spending by $13B although the percentage of budget spend will decrease.

Now, what do you think the effect of the Obama budget will have on that graph over the next 4-8 years?

Remember that graph from the Congressional Budget Office? 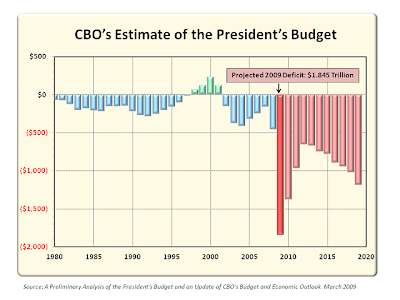 Folks, the US cannot withstand such a seismic impact on its economy and remain...the US.
Prepare for a period of Euro-Japanese stagnation and an increasing number of US corporations relocating to countries with friendlier taxation regimes.
How that helps end the recession is beyond me.
(Nothing Follows)
Posted by Jack Lacton on Thursday, April 02, 2009

You are missing one key fact on that graph. The reason that the 2009 line is so much larger than the previous ones is because the expendatures in Iraq and Afganistan prior to 2009 were not shown in the budget.

Bachman made this same mistake in her reaction to the State of the Union Address a few weeks ago.

Additionally, the new iPhone will likely feature Force Touch, like the Apple Watch and the newer MacBooks. Force Touch employs haptic feedback technology to measure the pressure of a tap, adding a new dimension to trackpad and touchscreen sensing

925 silver is too soft, Designer handbags and the surface oxidation will occur after a rusty ugly, after entering the era they rarely use watches. UK Replica watches In order to reproduce the classic case of silver pocket watch in texture, while strengthening the material properties of Replica Rolex Watches silver, Bell & Ross, especially the development of ArgentiumR alloy as the material of the watch. Watches Replica ArgentiumR is a silver germanium alloy material patent, adding 1.2% Ge in handbag replica .

There are times when you suffer the disease being treated immediately, before things got worse. Thank you for the information:)