Announcing the death of Climate Science as we know it

It's fair to say that the science underpinning the proposition that mankind is responsible for the warming the planet has experienced over the last hundred or so years has copped a battering.

Less battered in the public arena are political operatives, the Climate Liars, such as the IPCC, Al Gore, James Hansen, the Hockey Stick team and Big Green environmental groups who currently hold public opinion in their grasp.

Europe is already suffering the economic pain inflicted on its people by the travesty of pandering to misanthropic green groups with the unilateral introduction of carbon trading laws.

While the extent and cause can be argued, it's also clear that many developing nations are suffering the unintended consequence of higher food prices brought about by the use of ethanol as a fuel substitute.

Climate change policies have as their platform the output of a variety of climate models. As I've pointed out previously, these models have a zero percent prediction rate, which makes one wonder how history will view the politicians who used them to further their political goals when the consequences are so dire.

So far, climate science resembles astrology more closely than real science and climate models' predictions are closer to horoscopes than anything meaningful.

If climate science is indeed real science then it should make predictions that can be tested. As Karl Popper tells us, the essence of science is falsifiability. If it can be falsified then it is wrong.

As it happens there is.

Before I go to that I'll provide a similar example of a theory making a prediction that could be tested. A negative result would have killed the theory stone dead. A positive result didn't make the theory fact but maintained the theory's ongoing relevance.

That was the Big Bang Theory.

If you've read George Smoot's book Wrinkles In Time then you'll be familiar with the story.

In order for the big bang theory to be correct there must exist a background radiation signature that could be detected. Smoot, along with John Mather, led a team of scientists in the search for the signal. In 1989 NASA launched its Cosmic Background Explorer (COBE) satellite.

After more than two years of observation and analysis, the COBE research team announced on 23 April 1992 that the satellite had detected tiny fluctuations in the CMB, a breakthrough in the study of the early universe.

Thus, a key prediction of the theory was shown to be true. For their work Smoot and Mather won the Nobel Prize in Physics in 2006.

The most important is that of an increased greenhouse effect is a hotspot in the atmosphere over the tropics.

Each possible cause of global warming has a different pattern of where in the planet the warming occurs first and the most. The signature of an increased greenhouse effect is a hotspot about 10 km up in the atmosphere over the tropics.

We have been measuring the atmosphere for decades using radiosondes—weather balloons with thermometers that radio back the temperature as the balloon ascends through the atmosphere. They show no hotspot whatsoever.

To support this claim he provides the following evidence:

The theoretical signatures come from the latest big report from the IPCC, which is the most authoritative document for those who believe carbon emissions caused global warming. The IPCC Assessment Report 4 (AR4), 2007, Chapter 9. Figure 9.1, in Section 9.2.2.1, page 675, shows six greenhouse signature diagrams. (http://ipcc-wg1.ucar.edu/wg1/Report/AR4WG1_Print_Ch09.pdf)

In each diagram the horizontal axis is the latitude, from the north pole (90 degrees north) through the equator to the south pole (90 degrees south). The vertical axis shows the height in the atmosphere, marked on left hand side shown as 0 – 30 km (and on the right hand side as the corresponding air pressures in hPa). The coloured regions on each diagram shows where the temperature changes occur for each possible cause (red +1°C, yellow +0.5°C, green −0.5°C, blue −1°C per century). 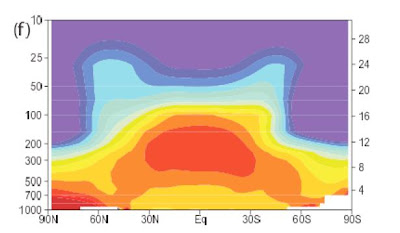 ...The other main authoritative source for the case that carbon emissions caused global warming is the US Climate Change Science Program (CCSP). Atmospheric temperatures have been measured by radiosondes (at all heights) since the 1960s, andby satellites using microwave sensors (up to 5 km) since 1979. The CCSP published the results for 1979 – 1999 in part E of Figure 5.7 in section 5.5 on page 116: http://www.climatescience.gov/Library/sap/sap1-1/finalreport/sap1-1-final-chap5.pdf 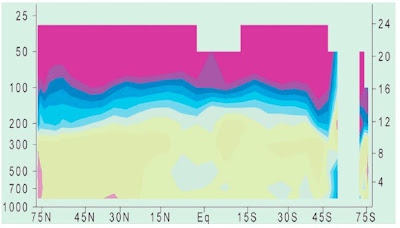 This diagram is confirmed by more radiosonde data collected after 1999, and also after May 2006 when this diagram was published.

The theoretical combined signature expected by the IPCC contains a prominent and distinct hotpot over the tropics at 8 – 12 kms. This hotspot is the signature feature of an increase in greenhouse warming.

When the signature was found to be missing, alarmists objected that maybe the readings of the radiosonde thermometers might not be accurate and maybe the hotspot is there but went undetected. The uncertainties in temperature measurements from a radiosonde are indeed large enough for a single radiosonde to maybe miss the hotspot. Yet hundreds of radiosondes have given the same answers, so statistically it is not possible that they collectively failed to notice the hotspot.

Recently the alarmists have suggested we ignore the radiosonde thermometers, but instead take the radiosonde wind measurements, apply a theory about wind shear, and run the results through their computers to estimate the temperatures. They then say that the results show that we cannot rule out the presence of a hotspot. If you believe that you believe anything.

Climate science makes a key prediction that can be tested.

When tested the prediction is shown to be false.

Therefore, climate science is shown to be false.

Climate Science is dead. Long may it rot in hell. 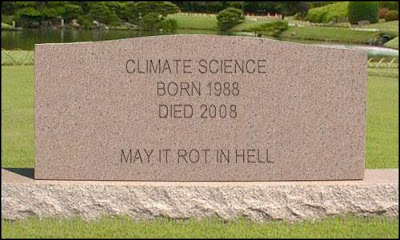 Jack....boobie...proof or disproof isn't important. It's the consensus that's important.

What they buh-lieve is all that matters to the loopy libs.

Dude! we're supposed to vote on it, like we did with gravity. You know, like concensus, know what I'm sayin'?.

Ha ha ha! I think this is probably your most grotesquely Luddite, anti-scientific, anti-intellectual load of bullshit yet. climate science is shown to be false - ha ha ha! Every last aspect of it? Do we now have no understanding whatsoever of how the climate works?

The vertical profile of the temperature of the atmosphere is in fact quite consistent with model predictions, and on top of that, models predicted that the stratosphere would cool as CO2 concentrations increase (observed), that the Arctic would warm faster than the rest of the world (observed), that large volcanic eruptions would lead to sharp but short-lived cooling (observed), and that surface temperatures would rise by about 0.2°C/decade if CO2 concentrations rose by 1-2ppm annually (observed).

It only takes ONE falsification to kill a theory even if there are a MILLION observations that support it.

If you knew anything about science then you would know that.

Yeah, but there isn't even one falsification here. And even if observations were inconsistent with one prediction of climate models, that would not mean that the entire science of climate studies was 'false'.

Imagine there was a theory which actually made a million predictions which had been verified, and one which observations contradicted. Generally speaking, would you say that theory must therefore contain nothing of value, and must be scrapped in its entirety, or would you say that much of the theory was likely to be correct, with some minor aspect probably needing revision?

Finally! Some climate warming apostle is discussing this within the framework of scientific theory rather than "settled science...the debate is over".

I see no reason for us to up-end our economies in response to some fruity, substantially flawed theory, and, in the process, grant command and control powers to international socialists.

Let's keep straight who the advocates of this fraud are.

If there were a million correct observations and one shown to be false then the theory is invalidated.

Right, well, the big bang theory did not predict that the expansion of the universe was accelerating. Therefore, there was no big bang. Correct?

Aren't you the perfect sophist idiot?

The hotspot is a key prediction of the alarmists' models that also predict the inundation of Naples, FL as well as broiling heat. Not having found the hotspot, the models are obviously fatally flawed as is the basic CO2 forcing theory.

However, the so-called Big Bang theory didn't make predictions about the velocity or acceleration, but rather focused on how it all started. This was a key prediction of General Relativity that even Einstein failed to grasp until Hubble showed up with evidence of deeply red-shifted galaxies that demonstrated the expansion of the universe....also predicted by General Relativity.

It wasn't until later when mass calculations and evidence of acceleration that dark matter and dark energy theories emerged....also supported by General Relativity.

But the Big Bang theory made no such predictions. The most that can be said is that they made assumptions about velocity as a means of establishing event horizons. However, the discernment of acceleration didn't alter the Standard Big Bang theory. At the most, it altered certain of the implications such as the age of the universe, the temperature of space and dark energy features. And it's not even clear that those predictions have changed.

The global warming hoax is disintegrating and you are going down with the ship of fools.

I believe that it was Dr. Evans' point that if you believe this wind-shear-thumb-on-the-scales-with-idiotic-fudge-factors nonsense....you'll believe just about anything.

That would be a Luddite. Jack doesn't need me to speak for him since he can more than handle your plump loopy lib rump, but while the Luddites were busy breaking looms trying to keep people enslaved, the Lactons were trying to free people from the tyranny of agenda-driven zealots like you warming co-religionists.

How about just taking measurements of temperature at various altitudes and see what you find?

The answer to that would be...nuthin'.

Would someone care to explain the Dust Bowl of the 1930's to me? This occurred in a then largely undeveloped section of the U.S. Yet it wiped out crops. Today it's 107 in Dallas and people are claiming in serious tones "when was the last time that happened." The answer is it happened in 1980, and 1956, and 1930's. Drought, famine, pestilence. weather and growth are all cyclical in nature. So we are in a warming period. So what? We can't change it and the draconian measures deemed worthy by the world's new religious zealots are have about as much to do with science as alchemy.

'Krumhorn' - links to studies? Funny how you and Lacton seem to find the concept of linking to papers so difficult to grasp.

ellen k - try not to confuse the US with the world. They're really very different. The statement Drought, famine, pestilence. weather and growth are all cyclical in nature is entirely false.

I gave you two links. One to the Harvard-Smithsonian survey and the other was a link to the Loehle study. Both made clear that a 2000 year examination shows that the MWP....over 1000 years ago...... was warmer than today.

Don't let contray science shake your convictions. What you buh-ieve is apparently far more important than what you know.

Krumhorn - the flaws in the two studies you quote have been quite comprehensively discussed. What I was asking for was not links to any old random study on any old random subject, but studies which backed the claims you made in your previous posts.