The August 2007 edition of New Scientist includes the following article:

Prepare for another ten scorching years

Temperature records will be repeatedly shattered over the next few years, say researchers behind the first rigorous look at how global climate will change during the next decade.

The prediction comes from an innovative technique that combines the approaches used by weather forecasters, who typically look a few days ahead, and climate modellers, who produce projections that run up to the end of the century. The result is a model that can project as far as 2015, filling in a long-standing gap in climate predictions.

Although average global temperatures have been relatively flat in recent years, the model says they will start rising again next year. At least half of the years between 2009 and 2015 will exceed the current warmest year on record. By 2015, global temperatures will be 0.5 °C above the average value for the last 30 years.

“This is a very important paper,” says Rong Zhang, an oceanographer at the Geophysical Fluid Dynamics Laboratory in Princeton, New Jersey, who is using similar techniques to study the Atlantic Ocean. “This is just the beginning for this approach.”

The forecast is only possible because better figures are available on the state of the world’s oceans, says Doug Smith, a climate modeller who developed the predictions with colleagues at the Hadley Centre for Climate Prediction and Research in Exeter, UK.

A network of automated ocean-going devices, now numbering around 3,000, has been deployed around the planet since 1999. The devices, known as Argo floats, provide updates on ocean temperature and salinity - factors that are critical in determining global climate patterns.

Armed with the Argo results, Smith was able to create a climate model that started with an accurate representation of the world’s oceans. Without access to such data, traditional models had ignored the fine details of current climate. That meant the predictions they produced were only reliable for periods decades in the future, at which point the influence of variations in factors like ocean temperature will have been swamped by more powerful forces, such as greenhouse warming.
Temperature plateau

Smith’s approach seems to be working. Some of the figures published this week come from a trial of the model that was run in 2005. Comparisons with subsequent observations show that the model captured the recent plateau in global temperatures.

Such lulls could be used by climate change sceptics to argue that the world is not warming as predicted and that plans to cut greenhouse gas emissions are unnecessary, says Smith, so it is useful to be able to spot a brief pause in what is expected to be a steady increase. “There would be pressure not to mitigate emissions if we couldn't predict a flattening,” he says.

Policy makers are also likely to benefit in other ways, says Zhang, since the approach used by Smith will soon be applied to regional climate models. That could eventually lead to better predictions of droughts and floods, events that are hard to predict even a few months in advance.

Electricity generators could use the model to predict demand, since energy use increases during very hot or cold spells. Smith says one UK electricity company is already buying his data and the results will also be considered by the project’s sponsors, the UK government’s Department for Environment, Food and Rural Affairs.

In summary, one year ago the prediction was that the world's temperature was going to increase rapidly and the evidence comes from the study of oceans.

On the other hand, cooler heads (pardon the pun) are betting on the world entering a prolonged cooling phase.

Addressing the Washington Policymakers in Seattle, WA, Dr. Don Easterbrook said that shifting of the Pacific Decadal Oscillation (PDO) from its warm mode to its cool mode virtually assures global cooling for the next 25-30 years and means that the global warming of the past 30 years is over. The announcement by NASA that the (PDO) had shifted from its warm mode to its cool mode is right on schedule as predicted by past climate and PDO changes (Easterbrook, 2001, 2006, 2007) and is not an oddity superimposed upon and masking the predicted severe warming by the IPCC. This has significant implications for the future and indicates that the IPCC climate models were wrong in their prediction of global temperatures soaring 1F per decade for the rest of the century. 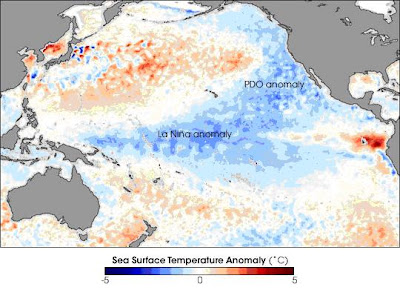 The cool water anomaly in the center of the image shows the lingering effect of the year-old La Nina. However, the much broader area of cooler-than-average water off the coast of North America from Alaska (top center) to the equator is a classic feature of the cool phase of the Pacific Decadal Oscillation (PDO). The cool waters wrap in a horseshoe shape around a core of warmer-than-average water. (In the warm phase, the pattern is reversed). Unlike El Nino and La Nina, which may occur every 3 to 7 years and last from 6 to 18 months, the PDO can remain in the same phase for 20 to 30 years.

As shown by the historic pattern of PDOs over the past century and by corresponding global warming and cooling, the pattern is part of ongoing warm/cool cycles that last 25-30 years. Each time the PDO mode has shifted from warm to cool or cool to warm, the global climate has changed accordingly. In 1977, the PDO shifted from cool mode to warm mode and set off the global warming from 1977 to 1998, often referred to as the “Great Climate Shift.” The recent shift from PDO warm mode to cool mode is similar to the shift that occurred in the mid-1940’s and resulted in 30 years of global cooling. The global warming from ~1915 to ~1945 was also brought on by a mode shift in the PDO. Every indication points continuation of the PDO patterns of the past century and global cooling for the next 30 years. Thus, the global warming the Earth has experienced since 1977 appears to be over!

Add the PDO data to the fact that the sun has gone very quiet lately and it's impossible to rule out the strong possibility that the world is going to enter a cooling phase.

So what's it going to be?

I'd take the heat option any day of the week.

Unfortunately for Australia we're about to inflict the greatest burden on our economy in history with the government's emissions trading scheme. A burden that will see the use of the fossil fuels required to heat our homes in a cooling environment become much more expensive.

Who will that hurt? Those who can least afford it. As always.

That's why people who proselytise the man made global warming position are such immoral bastards.

“This multi-year Pacific Decadal Oscillation 'cool' trend can intensify La Niña or diminish El Niño impacts around the Pacific basin," said Bill Patzert, an oceanographer and climatologist at NASA's Jet Propulsion Laboratory, Pasadena, Calif. "The persistence of this large-scale pattern tells us there is much more than an isolated La Niña occurring in the Pacific Ocean."

“The comings and goings of El Niño, La Niña and the Pacific Decadal Oscillation are part of a longer, ongoing change in global climate,” said Josh Willis, a JPL oceanographer and climate scientist. Sea level rise and global warming due to increases in greenhouse gases can be strongly affected by large natural climate phenomenon such as the Pacific Decadal Oscillation and the El Nino-Southern Oscillation. “In fact,” said Willis, “these natural climate phenomena can sometimes hide global warming caused by human activities. Or they can have the opposite effect of accentuating it.”
(jpl.nasa.gov/news/news.cfm?release=2008)

(The scientists behind the research come to quite a different conclusion than Easterbrook, it's important to look beyond the headlines.)

Cold kills. Warmth brings life. - it takes a really special kind of idiot to say something so utterly stupid. Are you really too thick to know what heat waves and tropical diseases are?

There is SHOCKING news in the sports betting industry.

It has been said that every bettor must watch this,

Watch this or stop placing bets on sports...