From Climateaudit comes the following graph of temperature since 1979.

The red dots are when Climate High Priest James Hansen first predicted doom and gloom for the world based on our carbon emissions in his original 1988 testimony to Congress and where it is now, 20 years later, for his current spewing forth of Climate Agitprop.

There's nothing to add, really.

Ooh, wait. There is actually.

How about a graph from Hansen's 1988 testimony showing his Scenarios A, B & C? Scenario B has been held up by the Climate Faithful as proof that climate models work. The fact that his inputs don't reflect what actually happened and that it's now miles wrong is completely ignored by those who've well and truly swallowed the Climate Kool Aid.

I've marked 1988 and 2008 with red dots so you can compare for yourself the two graphs. 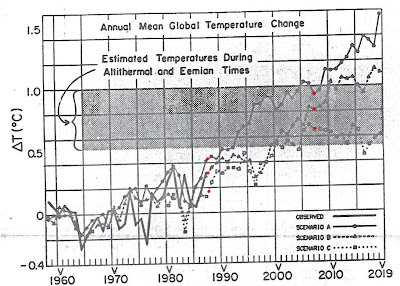 Do you realise you are presenting a comparison between monthly and annual data? Are you aware that this is not valid?

If you can find some way to 'annualise' the first graph and not end up with the same result then I'd be really impressed.

Fucky - it doesn't surprise me in the least that you don't know how to check these things out. MSU data for the lower troposphere is here. To get an annual mean anomaly, just add up the monthly anomalies for a year and divide by 12. What you get is this: 1988 had an anomaly of +0.11°C. 2007 had an anomaly of +0.28°C. Which of those two numbers is bigger?

When you answer the Tuvalu question then you can have responses.

You think I really need to wait for a response from you on which number is bigger out of 0.28 and 0.l1? Which Tuvalu question anyway?

Ah, here you are!

Still flinging your childish poo about in your inimitable fashion?

Why don't you go and play with the Big Boys, like at Anthony Watt's site?

Here is the MONTHLY data from June 1988 to date, at Watts Up With That? - go and argue your point there, if you have the balls.

I suspect that you do not.

He can't go to WUWT.

He's being paid to disrupt this blog

i figured out some time back that Fudgie probably spends his waking hours promoting AGW hysteria on various blogs and is most likely working for, or affiliated with, environmental socialist groups.

he sounds a lot like Ender who promotes the climate lies and is ubiquitous at truth-telling, pro-science sites like mine, Climateaudit, WUWT etc etc.

I know, these drones are all over the web rewriting history, editing the wiki's, trolling message boards & blogs etc.

Anyway you must be really pleased that you have your own real life leftie drone on your blog. - Kind of affirms that you're doing the right thing.

If I had a pet troll on my blog I'd be delighted.

Isn't comparing a cherry picked month with an annual (or possibly 5 year running mean like he used in JGR, vol. 98, pp9341-64) mean a bit silly?

I mean, if you take UAH anomaly for January or February 2010 instead, compared with December 1988, then you get +0.75C warming. It's clearly really sensitive to your choice of month, showing that it's a silly method of comparison.

If you compare something a tiny bit more sensible, like a 5 year annual temperature, like Hansen's fig.3 in the aforementioned paper, then you get temperature rises in HadCRUT3, GISTemp & UAH similar to those that Scenario C expected. (+/-25%)

That said, I thought he went for a climate sensitivity ~4.5C back then, which is about 50% higher than the modern IPCC estimate, so you'd expect his 20 year old models to be running hot.