About 15 years ago I was playing cricket and, as our team was batting, took the opportunity to wander over to the next oval and spend some time watching the ladies have a game. These weren't just any ladies, either, they were contenders for national selection so they were at the top of the tree talent-wise.

The first thing that struck me was how much slower the whole game was. The fast bowlers were of very pedestrian pace, the shots were hit with little force and the throwing was weak. It dawned on me that these women would not have been able to handle my bowling when I was in an Under-16 player.

I then realised that it was highly likely that the Australian Under-16 boys' team could probably beat the Australian women's team. Whenever I have mentioned this to women they always accuse me of being sexist, of course.

The equal prizemoney for men and women at Wimbledon and elsewhere has always puzzled me. There's no comparison between the two from a spectator's point of view. Why do women play best of three sets while men play best of five? Why are women's golf tees so far in front of the men's. I don't care that they are but, please, don't tell me they're worth the same money.

Todd Gallagher has a terrific piece in the National Review Online. Check out the table of records and you'll see exactly where women are in the grand scheme of sporting things.

The point is not that men and women are not equal. The point is that they're not the same.

"Can Jamaica’s Sprinters Fight Crime?” That’s the tongue-in-cheek headline of a recent Time magazine article celebrating the remarkable Olympics performances of track stars from that Caribbean nation. In the space of a few days, Usain Bolt smashed world records in the men’s 100 and 200 meters, while three Jamaican sprinters swept the medals in the women’s 100 meters.

Time’s question is amusing, but for me, the incredible accomplishments of the Jamaican track team call to mind another question that isn’t so funny to a lot of people — as I learned the hard way.

You see, I wrote a book in which I worked with professional athletes and Olympic medalists to settle a series of long-running sports debates. The questions I heard most often had to do with gender: How big is the gap between the top male and female athletes?

One of my initial findings was jarring: the women’s Olympic record in the 100 meters, set in 1988 by superstar Florence Griffith-Joyner, is virtually identical to the U.S. record for 14-year-old boys — also set in 1988, by the less heralded Curtis Johnson. The winning time of 2008 women’s gold medalist Shelly-Ann Fraser? Well over a tenth of a second slower than Johnson’s. 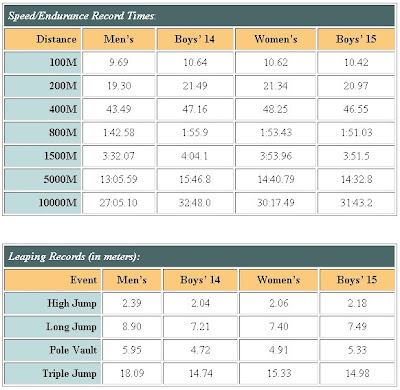 I was surprised that this information had never been disseminated widely, since the data I researched and the interviews I conducted didn’t take long to put together. Obviously, I’m not suggesting that any slob off the street could outrun Shelly-Ann Fraser; but if she can’t beat the time that a 14-year-old boy set 20 years ago, surely that fact should inform a number of gender-and-sports discussions: Has Title IX done enough to level the playing field for female athletes — or has it actually penalized male athletes? Should golfers like Michelle Wie receive sponsors’ exemptions to compete against men in PGA tournaments? Should Wimbledon award men and women tennis players the same prize money?

For example, in October 2007, Eileen McDonagh of Northeastern University and Laura Pappano of Wellesley College published Playing with the Boys: Why Separate Is Not Equal in Sports. “The premise of this book, and our work,” McDonagh says, “is that sex segregation does not reflect sex differences between men and women, rather it constructs them.”

I laid out the results of my research for Pappano and asked why male athletes outpace female athletes starting at 14 and 15. She answered: “Women are told around that time that they are athletically inferior to men and that they should start acting like ladies. That’s why we see the boys making such stunning gains at that age and the girls begin to suffer.”

While no one can deny that societal factors play some role, the research makes it pretty clear that there was a simpler explanation for the gap: puberty. The Centers for Disease Control publishes growth charts for the U.S. population which reveal that boys hit their major growth spurt between the ages of 14 and 15 — precisely when the best boy athletes begin to outperform the top adult female athletes.

My interviews with female professionals and others in the world of women’s sports confirmed the importance of boys’ physical development at that age. Aaron Heifitz, the publicist for the U.S. national women’s soccer team, described how the women’s squad performs against the best youth club players in Southern California: “The boys’ 13s we can handle pretty consistently, but when the boys start really developing at 14, and especially 15, that’s when you start to see real separation and they pass even the best women’s players. They’re just bigger, stronger, and faster.”

Eileen McDonagh has suggested that gender differences don’t matter in skill-based games that don’t place a premium on size, strength, and speed — pointedly asking, during a speech at Wellesley, “Why on earth are pool and ping-pong sex segregated?” Here again, even a little research reveals that the best female performers can’t compete consistently with the best males. Ping-pong actually relies heavily on physical attributes, and the difference between male and female competitors is almost as severe as it is in tennis — where the 203rd-ranked male player soundly defeated both Serena and Venus Williams in separate exhibition sets (6-1 and 6-2, respectively). In pool, Jean Balukas — possibly the greatest female player of all time — finished in the middle of the pack in men’s events in the 1980s; and Jeanette “The Black Widow” Lee — formerly the world’s Number One female player — told me, “You would not believe the amount of men, in my world, who can wax me.”

Cathy Young, the author of Ceasefire: Why Women and Men Must Join Forces to Achieve True Equality, suggests that that failure to discuss research findings openly and honestly reflects a larger feminist agenda of “bio-denial” to promote the idea that there are no natural differences between the genders. “There’s a whole establishment that’s invested in perpetuating the notion that there are not inborn differences between the genders athletically, and that any differences can only be attributable to sociological circumstances and societal oppression. They have a clear agenda to empower women through a distorted notion of equality but these people are saying things that are completely out of touch with biological reality.”

Kurt Fischer, director of the Mind, Brain, and Education Program at Harvard’s Graduate School of Education, has seen this firsthand. “I’ve been at faculty meetings where the notion that there are differences in the genders is ridiculed,” Fischer says. He adds, “[T]he first woman dean at Harvard was my dean when she got here, and when I would try to bring up studies that showed inborn gender differences she wouldn’t even allow it.”

Anyone who saw what happened to Harvard president Lawrence Summers — for even suggesting that there could be inborn gender differences — might conclude that challenging the claims of the Laura Pappanos of the world is an unnecessary headache. “When you have a large group of people with a vested interest in maintaining an agenda,” Fischer observes, “they’re going to find ways to attack anyone or anything that threatens their existence.”

The media have also obscured the facts in this debate. Young suggests a reason for this: “At most newspapers, Title IX is gospel at this point. And anything that could be seen as an argument against it is going to be ignored, attacked, or ridiculed.”

Professor Fischer was not surprised when I told him of my difficulties getting traction with my own data. “I have a colleague here in town that has a biologically based view of gender differences. She’s done a whole lot of research that shows fairly large, important differences between boys and girls in their socio-relationships at an early age. And she was prevented from publishing that at several points from people who just didn’t want to hear that point of view, regardless of the evidence.”

We almost certainly won’t hear anyone discussing controversial gender issues in all the hype surrounding the closing days of these Olympic Games. But maybe if we keep laying out the data in a calm and rational manner, we can advance the discussion beyond the biased, politically correct, opinionated nonsense that passes for serious intellectual debate on this subject.

And what happens at 14 and 15? A massive boost of Big T (Testosterone).

That's right, elijah, but you can't make a case that we should be paying 15 year old boys the same as women in tennis can you?

15 year old boys don't walk around in minidresses do they? So no.

"Equal" applies only to items with a single dimension. People are multidimensional. Accordingly, the correct answer to "are men and women equal?" is "Mu!" (Douglas Hofstadter wrote in Godel, Escher, Bach that that means "UN-ask the question!" Sounds about right.)

females at grand slams should never get the same amount as the men. Why not? Well its got nothing to do with the best of 3 vs best of 5 set debate.

The reason is because men bring in more money to tennis than women. More money comes in equals more money should proportionetly go out.

Admittedly, over the last 10 years, female tennis has grown in comparison to mens, but is still well behind.

and pioneering spirit of Replica Watches the founder Hans Wilsdorf, has a close relationship. Early 20th century, when the watch Replica watches UK is still quite prevalent when young, he had already engaged the Swiss watchmaking industry, Rolex Daytona and the idea of wearing the watch.Although the lack of accuracy of the watch at the time, handbag replica but Hans Wilsdorf was able to not only watch the preview show elegance, and at the same time Replica handbags accurate.

This article is very meaningful .. thanks