The irreverent Gerard Jackson points out that Australia's economy is tanking at an alarming rate.

In response, the government proposes classical Keynesian pump-priming, which will not only kick the can down the road but make things even worse when we have to take tough decisions to fix things.
It has also brought forward infrastructure development to help. While I agree in general that we should maintain a strong level of infrastructure investment it's also true that less than 25% of funding is spent in the first year after plans are announced meaning that it will have little effect in the next couple of years, which are the most critical.

On top of that the government has laid out plans for its emissions trading scheme, which starts with a modest-looking 5% reduction target but in reality is a Trojan horse for the fell hand of government interference in the economy.

Accountants and lawyers should be rubbing their hands with glee at the prospect of plunging their snouts into the public trough thus joining a bevy of fraudulent climate scientists whose pseudo-science supports the AGW position.

The Australian economy is on the skids and our economic commentariat don't even know it. The AIG (Australian Industry Group) report for November states that "manufacturing activity fell for a sixth month in a row". How can this be when unemployment has barely budged from 4.3 per cent? The important thing to note about the AIG performance manufacturing index is that anything below 50 indicates a contraction.

In June both production and the PMI fell below 50 and stayed there. Starting in September all three indicators began to rapidly fall, with employment dropping from 46 to 33.2, the PMI from 47.2 to 32.7 and production from 48.7 to 30.4. Like a bunch of bunnies caught in the headlights of an oncoming car our commentariat were mesmerised by the low unemployment rate. So long as this remained low there could be no recession. Hence their current confusion.

In 1999 I warned the US economy was heading into recession. I stressed that emphasis on the falling unemployment rate would conceal the vitally important fact that manufacturing was contracting and shedding labour. What was being called a "dual economy" was in fact and economy that was experiencing the emergence of masses of malinvestments that signalled the beginning of a recession. The economy still appeared sound to economic commentators because unemployment was still falling.

But what they could not grasp — and still can't — is that monetary expansion had increased the demand for labour at the lower stages of production; those close to the point of consumption. Eventually the recession would work its way down the production structure, cutting output and raising the level of unemployment. This is exactly what happened, just as it happened to Clinton it happened to Bush. The same thing is also happening to the Australian economy.

Despite the fact that statistics clearly show the recession first striking at manufacturing (the higher stages of production) our brilliant economic commentariat insist on promoting the Keynesian snake-oil recipe of increased consumption spending to "counter the downturn". We had eight "prominent economists", apparently led by former Treasury secretary Tony Cole, proposing that Rudd temporarily cut superannuation contributions in order to increase consumption spending.

What they are proposing is based on the mercantilist myth — taken up by Keynes — that consumption drives the economy. Not one single member of the financial media know this. George Megalogenis, a senior writer for The Australian, is typical of the breed. According to this genius there need be no rise in unemployment because

"The case for business hanging on to staff is stronger than it was during recessions in 1990-91 and 1982-83 because the economy is in a radically different shape."

This is sheer economic illiteracy. Completely undeterred by economic laws, Megalogenis went on to argue that dismissing labour simply because the demand for a company's products is dropping is really "dumb" because it

"will only make any recession deeper than it need be because every dismissed worker drags down consumer spending with them. (Business's new mantra, The Australian, 6 December 2008)."

This is the purchasing power of wages fallacy which holds that it is higher wages that raises living standards. This argument leads to the utterly absurd conclusion that poor countries can easily lift themselves out of power by legislating for wages to be raised to Western levels. To make is so simple that even Megalogenis can grasp it, wage rates are determined by the value of the worker's marginal product. In plain English, his productivity. And the only thing that can bring about a sustained increase in productivity is capital accumulation.

Completely blind to what ought to be self-evident errors Megalogenis pursues the fallacy, arguing that the beneficial effects Rudd's $8.68 billion binge that is directed at "those with the most pressing living expenses" could be offset by higher income earners increasing their savings.

Let us understand something fundamental here: Savings fuel an economy and entrepreneurship drives it. Without savings there can be no capital accumulation, i.e. economic growth. Increased consumption is the result of this process, not the cause. The classical economists understood that what a country needs if it wants more consumption is more production.

What our media economists have yet to understand is that though consumption is something like 66 per cent to 70 per cent of GDP, the latter greatly underestimates economic activity because it does not take account of the expenditure of intermediate goods on the false grounds that it would be double-counting. My own rough estimate put consumption at about 33 per cent of total spending, meaning that nearly two-thirds of this spending would be by business. Given this approach it is easy to see that it is business spending that propels the economy and not consumption. John Stuart Mill presented the classical view on this matter when he wrote:

Once again the economic commentariat find themselves without a clue. But surely Rudd's spending of the surplus could help stop the recession? No way. I do not know of a single case where consumption spending lifted an economy out of recession. Although it's possible for a government to trigger a consumption boom, such a boom would be marked by a largely stagnating manufacturing sector.

Moreover, from a purely economic perspective consumption alone could only be relied on to avert or overcome recession in a two-stage economy. This one in which there is a single production stage. The maintenance and supply of capital would then depend entirely on consumer demand. It goes without saying that this would be an impossible state of affairs. We live in a world of multiple stages of production. It can be no other way. However, the two-stage model brings into focus the fact that the argument for consumer spending to rescue the economy from recession is actually based on the fallacy of underconsumption.

In any event, recession has arrived and I consider an unemployment rate of 10 per cent to 12 per cent a distinct possibility, particularly when one considers Rudd's reactionary approach to wage rate determination.

Consider the following from the Australian Industry Group. 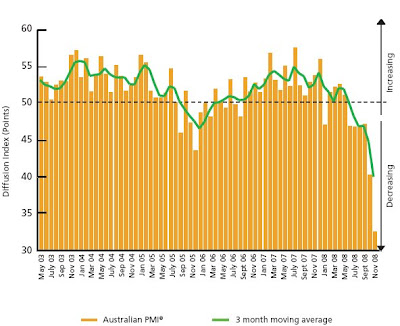 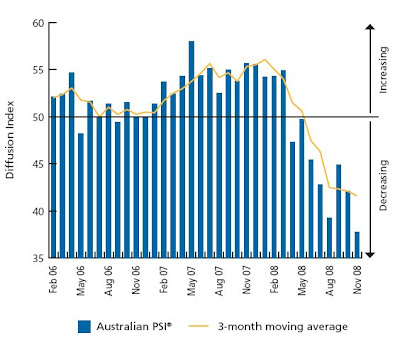 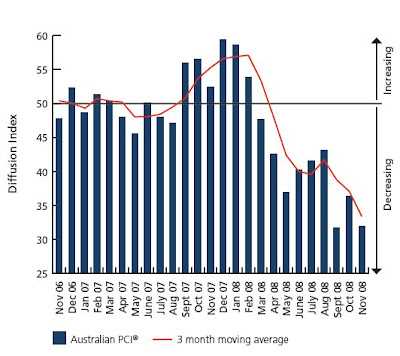 This is all bad, bad news for Australia.
Our economy is held up by the IMF and others as an example for the rest of the world to follow. I suspect that this opinion has lulled political leaders in Canberra into a false sense of security that has led them to make the shocking decision to stick $10 billion into the economy to try to avoid the recession.
Note to Labor. The recession has arrived and it's impossible for a dose of Keynsian economics to subvert the laws of financial gravity.
(Nothing Follows)
Posted by Jack Lacton on Tuesday, December 16, 2008

The US government is holding off the supernova of our Sun under by direction. I am the supernova physicist and the man of wisdom from the book of Revelation. The cost is a billion dollars or more a day. Many countries are contributing materials and Majestic Twelve is scamming the financial markets worldwide trying to pay for the supernova project. On January 3, 2009 the Indonesia great earthquake was caused by an incoming supernova blast wave from a type IV star. This was supposed to be Rev. 6:14 but I was awake and changed the course of history. Behold I make all things new by smashing the entire world with the secondary blast from our Sun is what I changed. The sharp downturn in temperatures worldwide is the Sun turning itself off. You had better wake up. We are at the point in time where the entire world goes to treaty with a Galactic Federation or we perish because the events are too big for us.

eToro is the #1 forex trading platform for new and pro traders.