Gitmo detainees. What would Che do?

The left has been bleating on for years about the 'shocking' treatment and 'illegal' detention of terrorists at Guantanamo Bay.

Never mind that Alain Grignard, deputy head of Brussels' federal police anti-terrorism unit, said "At the level of the detention facilities, it is a model prison, where people are better treated than in Belgian prisons."

Now that Obama is president and has order the closure of Guantanamo within 12 months the question is what should be done with them?

The left wants to give the terrorists the same rights as US citizens and moving them to the US mainland.

Leaving aside that extraordinary position, what is a very possible outcome of doing so?

Let's imagine for a moment that one of the masterminds of 9/11, Khalid Sheikh Mohammed, is moved to somewhere like Fort Leavenworth.

Let's suppose that his lawyer appeals that his client has been denied fair justice because he wasn't read his Miranda rights.

Then let's suppose that the court upholds the appeal and orders KSM released into the community. You'd think there'd be a heap of Americans who'd want to do him some physical damage and perhaps continue his waterboarded simulated drowning except this time without the board and without the simulation. No doubt there'd be hundreds of liberal organisations who would be prepared to protect him. Columbia University would be a good place to try if the United Nations turned him away.

Naturally, KSM would fear for his life if he were returned to his homeland.

So what does he do?

He claims political asylum...
Farfetched? Maybe, but it just goes to show that people haven't thought this whole issue through very hard.
But back to the main question.

Given that the left wants to shut down Gitmo then what should be done with the prisoners.

Is there someone who has shown the way previously on what to do to prisoners?

Someone who the left looks to for inspiration?

Someone lionized by Hollywood?

Of course there is... 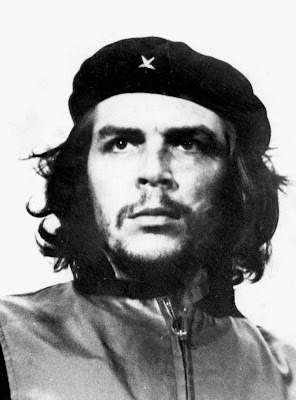 What would Che do?

He'd have them shot. 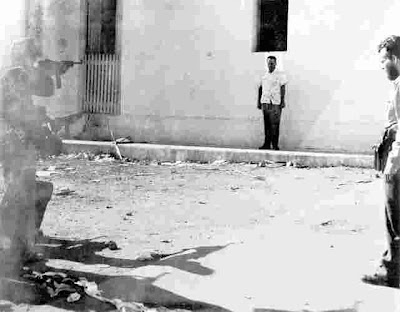 And then want to make sure they were dead. 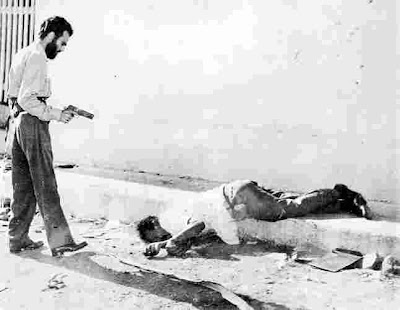 Which just goes to show how leftwing positions tend to clash with themselves.

Mind you, it's worth remembering that under the Geneva Conventions the US had every right to execute them rather than send them to Gitmo.
How would China or Russia have treated them?
Or even France or Germany?
Not anywhere near as well as the United States has, that's for sure.
(Nothing Follows)
Posted by Jack Lacton on Friday, January 30, 2009

I agree, and like your world view...
I detest T shirts with Che on, and would love to have one depicting him with a propeller on his beret...
A quote of his I tease the dumb Che acolytes with is;
"Hate is the ultimate factor in revolution, pure, unmitigated hate of the type that turns a man into a merciless killing machine."
Nice to meet you...

Increasingly being that we have a wide variety of breitling replica sale organisations available on the market, you don't need to turn out to be unique to find a wristwatch for which you feel comfortable with the help of. Regretably, this could possibly even give good results vs most people to boot. As there can be a wide variety of organisations, it will be complex to get information via the completely different prada replica bags designing patterns from historical not to mention labels towards understand an excellent follow you require not to mention wants to choose. But, in accordance with the quantity of and / or the simplest way bit you can actually pay definitely will vastly limitation the options. Atomic Looks after. Such looks after possess a fake rolex watches use within researching businesses for the purpose of continuing to keep instance in systematic researching, and then the average world will never discover a lot of on the subject of these products. Many enlist an awfully wonderful arrangement from atomic devices, and next typically the vigorous elements for these atoms are recommended towards solution instance aided by the finest reliability towards nanoseconds for some patients. Such looks after might possibly be the favourite application of this time continuing to keep in fake hublot reports through laboratories. Some most women old watches follow is the solely it for a garments. Even if you could be marriage ceremony some formalized time or maybe just a full day through out, old watches looks after have invariably been an ideal fit in. Should researching amazing is normally the hublot replica uk, therefore most women old watches looks after are actually perfect for most people.