After it was pointed out that celebrity NASA scientist James Hansen's work on the US surface temperature record contained flaws that resulted in 1998 being listed as the warmest year on record, NASA quietly changed its records.

The work being done by Steve McIntyre at Climateaudit is truly outstanding. First up, he completely debunked the statistical validity of the iconic Hickey Stick and now he has demonstrated that the US surface temperature record is wrong.

Climate Brown Shirts, of course, claim that the correction only makes a 1-2% change to the global record and that 1998 is still the warmest year on record.

The problematic nature of surface station temperature gathering is being uncovered at Anthony Watts' terrific Surface Stations project in which he and his growing army of volunteers are studying the method used to collect the data.

Here's an example of well-sited equipment along with the temperature record: 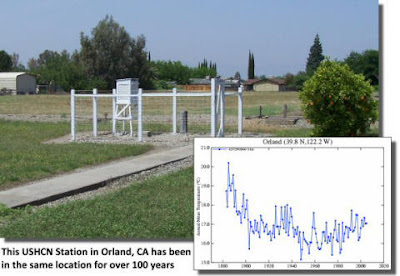 And now here's an example of one that is clearly got a few problems: 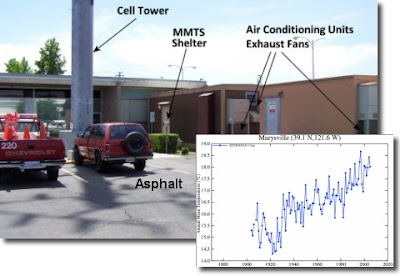 The good site shows no temperature increase while the poor site has a clear warming bias.

Check out Surface Stations and be prepared for some common-sense-curdling placement of recording equipment.

We're told that thousand of climate scientists agree et blah but it only took a couple of amateur investigators to uncover the truth. Naturally, they're accused of being part of a well-funded industry conspiracy to obfuscate the argument - which comes as news to them.

Bit by bit the data underpinning the anthropogenic global warming argument is being debunked. Will the media do their job properly and report this stuff honestly so that the public can understand how it's been deceived or will the media's political agenda continue to rule the day?

With 1998 being replaced by 1934 as the warmest year in the record when will we see the mainstream media print the following data?

There is an urgent requirement for the quality of all surface station temperature data from around the world to be quality checked. Somehow, I don't think that Climate Brown Shirts will be moving too quickly to get that task done.

I just read that James Hansen is also an activist for the Democrats.