Who is more immature in schools - the students or the administrators?

The following is an example of the intellectual and emotional immaturity of those people that run Payne Junior High in Arizona. For some reason the left seems to go overboard on non-issues such as this or global warming while at the same time providing moral support for such existential threats such as Islamic terrorism. 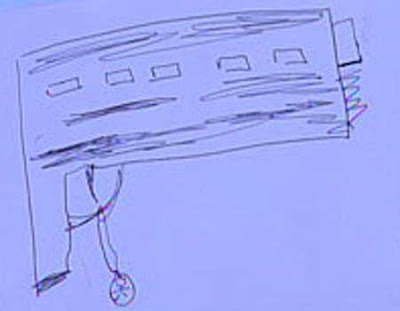 Officials at an Arizona school suspended a 13-year-old boy for sketching what looked like a gun, saying the action posed a threat to his classmates. The boy's parents said the drawing was a harmless doodle and school officials overreacted.

"The school made him feel like he committed a crime. They are doing more damage than good," said the boy's mother, Paula Mosteller.

The drawing did not show blood, bullets, injuries or target any human, the parents said. And the East Valley Tribune reported that the boy said he did not intend for the picture to be a threat.

Administrators of Payne Junior High in nearby Chandler suspended the boy on Monday for five days but later reduced it to three days.

The boy's father, Ben Mosteller, said that when he went to the school to discuss his son's punishment, school officials mentioned the seriousness of the issue and talked about the 1999 massacre at Colorado's Columbine High School, where two teenagers shot and killed 12 students, a teacher and themselves. Mosteller said he was offended by the reference.

Chandler district spokesman Terry Locke said the crude sketch was "absolutely considered a threat," and that threatening words or pictures are punishable.

The suspension of this student demonstrates a totalitarian mindset by those involved. Comparing a drawing - and a 'crude sketch' at that - to what happened at Columbine is one of the most intellectually bankrupt things I've heard for a long time.

If he had have drawn a picture of two men holding hands then would he have been suspended? What about a picture of a suicide bomber? He'd probably have been awarded a prize.

You know, its pretty ignorant to demonize and hate an entire group for the actions of a few who don't even publicly align themselves with that group. You're about a few weekends alone from a full-blown conspiracy theory.

And that, my friends, is what is called 'projection'...

When I was very young, there was a show on local television called Miss Pat's Playroom. Miss Pat was awesome--what I remember of her because I was so young when the show was on--she'd read to us, talk about "stuff", and then...then, she'd show our pictures.

That's right. If you drew a picture and sent it in, Miss Pat might show it on tv. Wow.

I drew a picture and sent it in. Sure enough, one morning I heard those words that every child longed to hear--Miss Pat was commenting on my picture! "And here's little Darren's picture of an airplane bombing a house." Next picture.

No gasps, no judgement calls, no calls to my parents, no referrals to a psychologist for grief counseling--especially since I'd never actually seen an airplane bombing a house. I just thought it was cool to draw.

No two ways about it, the behaviour of administrators at this school is foolish in the extreme. Without a source however, you are drawing a long bow to link this particular incident to either the ludicrous left or ignoring islamist aggression. While I might agree these attitudes are frequently in common, you have provided no evidence for your connection - and thus provide an easy way for your analysis to be derided as a "few weekends short of a full-blown conspiracy theory".