I have a stalker commenter from the UK who is, unfortunately for him but amusingly for me and my readers, a true Climate Disciple.

Anonymous commenters here earn the name fudgie. This particular commenter is such an ignoramus that we call him Fudgie.

Anyhow, his latest offering is that Tuvalu is actually affected by global warming.

Seriously, f---y, are you not able to answer that numerical question? It should be quite easy. And do do that search for 'tuvalu global warming' - I expect that you've got what you think you know about it from immature bloggers like yourself so reading some actual science would be good for you.

He thinks its funny to use a swear word to refer to me and then calls me an immature blogger. He also thinks that because there are 116,000 items returned by a Google search for 'tuvalu global warming' that it somehow qualifies as scientific research.

When a Climate Disciple uses Tuvalu as proof of global warming you know that they're completely ignorant of the science and accept uncritically everything that is spewed forth from Big Green.

So I thought I'd provide the real story of Tuvalu. Here's the start of the Wikipedia entry:

Tuvalu (IPA: [t:u:'valu]), formerly known as the Ellice Islands, is a Polynesian island nation located in the Pacific Ocean midway between Hawaii and Australia. Its nearest neighbours are Kiribati, Samoa and Fiji. Comprising four reef islands and five true atolls with a gross land area of just 26 square kilometers (10 sq mi) it is the third-least populated independent country in the world, with only Vatican City and Nauru having fewer inhabitants. It is also the second-smallest member by population of the United Nations. In terms of physical land size, Tuvalu is the fourth smallest country in the world, larger only than the Vatican City—0.44 km²; Monaco—1.95 km² and Nauru—21 km².

And want to know what it looks like? Here you go: 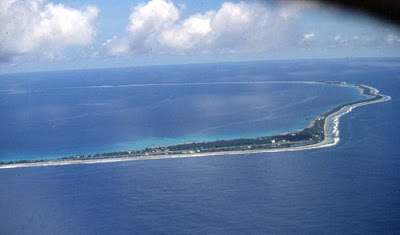 Now, you can clearly see that the place is at risk from a sea level rise. In fact, if a boatload of tourists pitched up and pissed into the bay then the place would probably go under.

The key to understanding Tuvalu is that it's an atoll. So what's an atoll?

An atoll (is an island of coral that encircles a lagoon partially or completely.

Check out the Wikipedia link, as there's an animation that describes how atolls are created. It is also the reason why they are unstable and tend to sink; their foundation is not solid in the same way that a mountain may be.

There are three estimates of sea level changes for Tuvalu. The first is a satellite record showing that the sea level has actually fallen four inches around Tuvalu since 1993 when the hundred-million dollar international TOPEX/POSEIDON satellite project record began. Second comes from the modern instruments recording tide gauge data since 1978. There the record for Tuvalu shows ups and downs of many inches over periods of years. For example, the strong El Nino of 1997-98 caused the sea level surrounding Tuvalu to drop just over one foot. The El Nino Southern Oscillation is a natural - as opposed to man-made -future of the Pacific Ocean, as areas of the Pacific periodically warm then cool every few years, causing significant sea level rises and falls every few years in step with the co-oscillations of the ocean and atmosphere. The overall trend discerned from the tide gauge data, according to Wolfgang Scherer, Director of Australia's National Tidal Facility, remains flat. "One definitive statement we can make," states Scherer, "is that there is no indication based on observations that sea level rise is accelerating." Finally, there is the new estimate by scientists at the Centre Nationale d¹Etudes Spatiales who also find that between 1955 and 1996 the sea level surrounding Tuvalu dropped four inches.

The fact is that not only has Tuvalu suffered a sum total of no rise in sea level but it may well have fallen a few inches in the last half century.

So you might conclude that Tuvalu is free from man made influences.

Au contraire, mon ami. It really does have some man made issues. And what might they be?

Basically, the local inhabitants have been excavating sand from the coastline for use as a building material. The result has been that it looks as though the sea level is rising and inundating the place. This was even admitted by Elisala Pita from Tuvalu's Ministry of Natural Resources.

Tuvalu is, in fact, representative of the impact that land use changes are having on micro-climates all over the world. The 'melting' of the snow atop Mt Kilimanjaro is a classic example.

The sooner the scientific world can get back to studying the real impact of land use change instead of trying to pin everything on CO2 so that they can get their research money the better off we'll all be.

In the meantime, though, Tuvalu will keep on keeping on, completely unaffected by all that CO2 being pumped into the atmosphere.

UPDATE: Andrew Bolt has a piece on Melbourne's Age newspaper (Australia's version of The Guardian) using such drivel as the Carteret Islands off Papua New Guinea as proof of rising sea levels.

What a prize idiot you are, Fucky! I didn't say 'do a google search for "tuvalu global warming"', I said search the academic journals for "tuvalu global warming". Do you know what the difference is? Probably not. You think Willie Soon is a climate scientist: he isn't. He's an astronomer. And yes, I think it's very funny that you don't like being given an abusive nickname. That you can't even see your double standards on that is even funnier.

Jack, we don't properly account for the extent to which The Church of Global Warming is a true religion that fills the void in the secular life of a loopy lib.

You could show pictures of ice cubes hanging from the palm fronds of Tuvalu and it won't dampen the ardor of those that worship at the altar of climate change and sup from the cup of their lies.

It's just amazing, but not surprising. It's a great moral void.

The only 'prize idiot' seems to be Fudgie with the dirty mouth. Did any of the facts about Tuvalu's non-imminent inundation get through to you? You are gonna have to find another example. Try the endangered polar bears, oh their population has increased fivefold in recent decades... Ooh, ooh, how about recent rising global temperatures, no temperatures stopped rising in 1998. Okaaayy, how about less ice at the poles, what's that you say, more ice than has been recorded in hundreds of years down south? Hmmm, well, you're just gonna have to keep hope alive.

Aha, another prize idiot! The temperature trend since 1998 is upward, despite the most fervent beliefs of braindead bloggers. No-one in their right mind thinks that polar bear populations have increased five fold - where on earth did you get that choice bit of nonsense from? And who do you think has been keeping records of Antarctic ice for 'hundreds of years'?

Your ignorance is spectacular. Do some research or shut up.

The temperature trend since 1998 is upward...

Even a zero trend is problematic given CO2 is supposedly the major temperature forcing agent.

Even the head of the IPCC says we're in for a cooling period for around 10 years before warming 'takes off' again so we need to institute socialist policies now.

He's angry with you because you wouldn't do his little sum.

Wow, the stupidity factor just keeps on going up and up! Cherry picking??? 'high' 2008??? 2008 is not included in the plot I linked to. 'Low' 1998??? 1998, according to the HadCRUT data, was the hottest year in the instrumental record. None the less, the temperature trend from 1998-2007 is upward. You can easily check this. It's obvious you can't get your head around how this is possible, and that's just another example of how you're too stupid to understand even the simple basics of maths, let alone the complexities of climate science.

Seriously, get hold of the HadCRUT data, plot the annual anomalies from 1998-2007, do least squares regression to find the best linear fit, and tell us what you get.

The point here, in case you miss it in your usual way, is merely that you're lying. 10 year trends actually are not very useful for understanding what the climate is doing - short term weather noise seriously affects the slope of the trend. Again, you can verify this very easily. Calculate the trends for 1996-2005, 1997-2006 and 1998-2007. Again, tell us what you get.

I misread the end date on the data but it doesn't change my original assertion.

The ONLY data set I trust is John Christy's, as he's not manipulating it, and because it's not from land-based, UHI affected temperature stations.

Why not go and do your tests on his data?

...yep, you've made it painfully obvious that you are just talking shit and the data contradicts you.

Interesting...OK, convert me to the cause anonymous. Lacton's posted his name and credentials. You post yours, and I'll have a look at what you're saying.

You can't post anonymously if you want to be taken seriously.

Ha ha! And posting as 'hoppers' is less anonymous, is it? Jack Lacton has posted his credentials has he? I must have missed those. All I've ever seen him post is a constant stream of Khmer Rouge-esque anti-intellectualism.

Herbal treatment is safe for treating various diseases, so you do not have to worry to try