EU democracy? No thanks.

Question: How is the European Union the same as a labour union?

Answer: Neither wants to put its leadership to a vote of its members.

The EU looks, walks and quacks like the old USSR so it should be no surprise that its leaders continuously try to overcome the wishes of the inconvenient group of constituents known as voters.

Unfortunately for them and in spite of a massive campaign to get the Irish to vote for the Lisbon Treaty (the latest incarnation of the EU power grab) they lost.

Gordon Brown promised a vote on the EU treaty before he became PM and recanted once Blair was gone. Other leaders refuse to allow their people a free and informed vote.

What have they got to hide?

After the Irish voted down the Lisbon Treaty last week, French President Nicolas Sarkozy had this to say: "A lot of Europeans do not understand how we are shaping Europe right now and building Europe, and we have to take account of that. . . . We have to change our way of building Europe."

"Building"? Mr. Sarkozy, whose country takes over the EU's rotating presidency next month, would have sounded more credible had he called for a new way of bullying Europe. For that's what seems to be happening. In the wake of the Irish rejection, other nations on the fence about Lisbon -- the U.K., the Czech Republic, perhaps Sweden -- are being pushed to proceed with ratification. Ireland has been threatened with near-expulsion from the Union unless Dublin finds a way to sneak the treaty past its voters.

If Monsieur le Président and other EU leaders were sincere about building a new Europe, they'd face the people. They'd put whatever document they decide to proceed with -- the very same Lisbon Treaty, a slightly rejiggered one, or something less ambitious -- before the entire EU electorate in next June's European Parliament elections. There would be one, EU-wide tally rather than nation-by-nation counts.

If most people in Europe really do favor closer integration, as their leaders maintain, then winning such an EU-wide vote shouldn't be as hard as winning referendums in prickly individual nations. Staging a plebiscite across the entire Union should also reduce the ability of marginal interest groups to skew the results by playing on domestic issues, as europhiles insist has been the case in past polls.

What's more, one could for the first time say there was something resembling a European polity. When Mr. Sarkozy speaks of "Europeans," he is identifying people in a way they still don't necessarily identify themselves, half a century after the EU's founding Treaty of Rome. Holding Union-wide elections is one way to build that missing identity.

With that in mind, here are two suggestions for a document that could be put to the people: the direct popular election of the proposed EU Council president, as well as for a scaled-down European Commission.

The current plan for the Council president is to have national leaders make the selection. But this process invariably breaks down into petty national -- and even personal -- rivalries. Popular election of the president would shift the discussion away from "who's the least offensive" and toward "who's the most qualified."

Electing European commissioners could be the most democratic exercise of all. The Lisbon Treaty usefully envisions a downsizing of the Commission from the current 27 members (or one per country) to 18. There has been much fear mongering and politicking about how to decide which countries are left without a commissioner during each five-year rotation. Why not vote for it?

But here's the catch: Commissioner elections would be done in the style of the Eurovision song contest. Voters wouldn't be able to vote for their own country's nominees. This method would make for a more competitive process. And as national capitals were forced to nominate candidates with wide appeal, they would produce a more capable set of commissioners than the usual bunch of mostly has-beens and never-weres.

There is of course little chance that EU leaders meeting later this week in Brussels will go for such a voter-centric plan. The Irish "no" will be met with fewer referendums, not more. But as long as its leaders keep running away from its people, Europe will have more, not fewer, problems.

The idea of the EU was to create a bloc capable of countering US world hegemony, which has become much more important to Europe since the USSR collapsed

It has been quite successful as a trading bloc, though there are still issues between individual nations, but has done nothing to unite Europeans as a people. In the area of trade it has achieved similar outcomes to the free trade agreements put in place by the United States.

But that's where the comparison with the US falls down.

The EU is in essence an unelected body whose sole function seems to be the making of rules. Check out the following picture of the consitutions of Europe, the US and Iceland side by side. 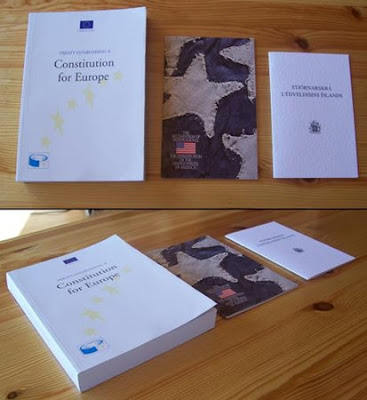 Europe is on a downward spiral, led by the cultural elites of the left.

Do they ever stop and wonder how truly undemocratic they are or do they believe that the end justifies the means?

Email ThisBlogThis!Share to TwitterShare to FacebookShare to Pinterest
Labels: Europe

Just to make sure that we are comparing apples to apples; are all three books in printed in english only? If the EU book has their constitution printed multiple times in multiple languages, it would skew your visual arguement.

Thanks for a very good question.

Given the front cover is printed in English I assumed the whole thing was.

I have now checked and can confirm that the whole thing is printed in English, so it really is as huge as it looks.

Which raises an interesting question. If the EU is about integration then what is the common language?

Seriously. First, the US Constitution is 4,932 words (that counts the signatures, but not the Bill of Rights).

Second, it's perfectly understandable to me, anyway, that the Irish voted the way they did. They fought for hundreds of years for independence, and only recently gained it. Why would they vote to give it up to their Continental betters?

Of course, it may be that I am an American, and the idea of national sovereignty is one we tend to take seriously, which the EU, apparently, do not.