First of all, when the heck did animals get rights? I'd argue that there's no such thing as human rights, only obligations, so the fact that animals are somehow entitled to them has always seemed strange to me. Leaving that aside, if they do have rights then aren't campaigners meant to actually be protecting them? Here's a piece from Germany that will make your brain pop out of your head, wander over to the fridge, grab a beer, sit down near the fire, adopt the classical thinking pose and try to rationalise the obvious Double Think involved. 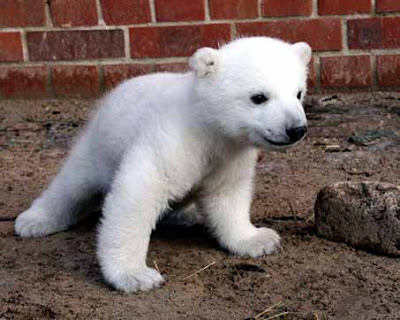 Berlin Zoo has rallied to the defence of Knut, a three-month-old polar bear cub, rejecting demands that the animal be allowed to die after being abandoned by its mother.

The fate of "cuddly Knut" has gripped the German capital since his birth in December. Rejected by his mother Tosca, the cub was adopted by a zookeeper who moved into the animal's enclosure to care for him round the clock.

Berlin Zoo said the animal would not be put down or left to fend for itself: "That's complete nonsense," a spokesman said. Knut has become an unofficial Berlin city mascot and has even had his picture taken by photographer Annie Leibovitz as part of a new climate change campaign.

Knut's mother Tosca — formerly a performing animal in an East German zoo — rejected Knut and his twin brother shortly after their birth. The twin died but Knut was "adopted" by zookeeper Thomas Doerflein. The polar bear is bottle-fed, washed and cuddled by his adoptive father, who moved in to the zoo to sleep in a bed by the bear's crate. Newspapers report that Doerflein also plays him Elvis songs on the guitar and gave him Christmas presents.

You see? For the animal 'rights' groups it's a case of animals are good, humans are bad. These are the same people that want to protect polar bears in the Arctic and babble on about climate change threatening their existence. Apparently, Knut's ongoing existence being due to the kindness of humans is unacceptable for these morally malnourished animal 'lovers'.

"I'd argue that there's no such thing as human rights, only obligations"

You sir, are a man after my own heart.

The polar bear is viewed as a traitor to its race, as it has become too cuddly and submissive to those who so 'erroneously' believe that humankind is the master race of the earth.

For that it must die.

What about this for the real reason?

The cudddly little guy's name reminds the Left of Knut Rockne. Of course the movie about his life Knut Rockne, All American starred that symbol of hatred for the Left, Ronald Reagan as George "The Gipper" Gipp.

Following Professor Peter Singer's ethics and many on the left, presumably it's a beautiful thing to have sex with the polar beer but evil to feed it...

Another resource for you: http://www.ng2000.com/fw.php?tp=animal-rights

Animals have a right to live and be helped to live as and when need be just like humans. Their inability to lookafter themselves, sometimes may not creat a controversy but compassion.

The information is very good indeed, may be useful for everything