Supporters of Australian terrorist, child abandoner and piece of human excrement, Mohammed Dawood (aka David Hicks), have been clamouring for years to have him released from Guantanamo Bay and returned to Australia for either trial or, preferably, freedom.

I have often wondered whether Dawood actually understands the support he is getting back home from those morally malnourished useful idiots that don't believe he did anything wrong, that he's being unbearably tortured at Gitmo, he's been there long enough and that the US administration is deliberately keeping him locked up on fallacious charges.

What, then, do they say when Dawood's own legal team attempts to delay his appearance before a military commission?

His supporters will undoubtedly find some way to blame the military or the Bush administration. It doesn't fit into their Hicks-as-victim narrative if they accept that his own defence team has sought a delay. Good on the judge for denying the application. 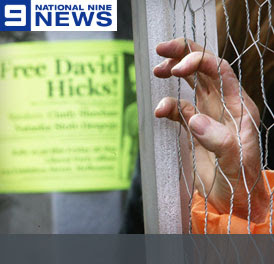 NineMSN had this image accompanying the story. For those that aren't keeping up with things one might think it's a photo from Guantanamo Bay however the sign in the background shows that it's actually from an inane protest held in Sydney the other day by Dawood's supporters.

Channel 9 seems to have a thing for Dawood, even running a story on him on 60 Minutes a few weeks ago. Imagine their surprise when viewer feedback, which was read out the next week, was overwhelmingly against him and expressed disgust at what he did and those that defend him. It's good to know that Aussies' moral compasses are still pointing in the right direction.

Having followed the case since he was captured - on the battlefield, it should be remembered - and looked at the charges against him along with letters he's written home expressing his joy and delight at the thought of knocking off the enemies of Islam I can only hope that he is found guilty and, with life in prison being the maximum sentence available, spends the rest of his days locked up in a small cell with Bubba Goldstein, a 400 pound child-molester.

Email ThisBlogThis!Share to TwitterShare to FacebookShare to Pinterest
Labels: Stupidity

You know it is not about if hicks is guilty but due process.

If hicks is guilty he deserves to go to gaol for a long time BUT conversly he deserves a fair trial with the right of appeal, just like all american citizens none of who can be trialed in teh same manner as hicks.

You are a simpleton

Well at least I'm not as much of a simpleton than one who can't tell I was taking the piss out of the whole thing.

Everyone wants to see him tried as soon as possible...except his own legal team!