In creating the anti-Iraq war film, Redacted, Brian De Palma wins the award as America's greatest coward; an award he picks up from the execrable Michael Moore. 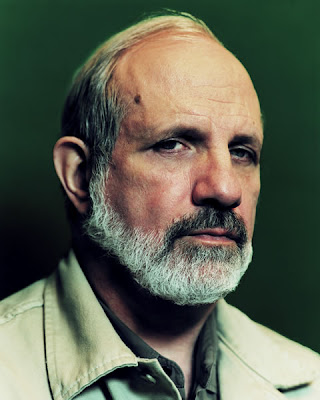 Two Hollywood films that take up the politics of the Iraq war grew out of the conviction that the American public was not getting the full picture of the violence.

Brian De Palma says he wants to stop the war with his film, Redacted by exposing a wider audience to images of horror that he says are not being delivered by the mainstream media.

With Vietnam, "we saw pictures of the destruction and the sorrow of the people who were traumatised. We saw the soldiers ... being brought back in body bags. We see none of that in this war," De Palma told a news conference Friday. One of his previous films, Casualties of War, dealt with the Vietnam war.

The title, Redacted, is a term meaning edited that is often used when sensitive material is expunged, or blacked out, from a document. De Palma's film, inspired by material he found on the Internet, is shot on video to present the film as though it were a series of clips that could be downloaded to your computer.

Inspired by actual events, the movie tells the fictionalised story of a group of young soldiers who rape a 15-year-old Iraqi girl, kill her family and then shoot her.

De Palma said he wanted to examine how the soldiers had gone so wrong. The movie doesn't present the judicial resolution, but it does show one soldier who came forward being treated with hostility by the military, in contrast to the more comfortable interrogations of the two main perpetrators.

In reality, four soldiers have been convicted in the case that inspired the film and handed sentences of up to 110 years in prison. A fifth man, who left the Army before being charged, faces a federal death penalty trial. The case has received wide media coverage.

The filmmakers had to negotiate a "legal minefield" to present real events as fiction, De Palma said, and the film opens with a disclaimer, which is slowly blacked out.

The final scene is a montage of real-life photographs of Iraqi war dead, including maimed and dead women and children, their eyes blacked out on the advice of lawyers because the film used actors and is not a documentary.

"The irony of Redacted is that it was redacted," De Palma said.

So why is De Palma America's greatest coward?

Firstly, it takes no courage to have a go at the US or its military, especially if you're part of the anti-war, loopy-left that makes up 99% of Hollywood 'elites'. What would take courage is if De Palma produced a movie showing the good that had occurred in Iraq, in spite of the errors along the way, the progress that the Iraqi people are making and the toll being inflicted upon Al Qaeda and its allies.

The main reason that he is a coward, though, is his presentation of one egregious incident of the war as being typical of the US military in an effort to portray the military as being made up of buffoons and thugs.

If someone made a movie about someone you loved, say your mother or father, who was a good and decent person who spent their life representing high moral values and had many achievements on behalf of their community, focused only on one particular incident in which a youthful transgression was dealt with before a court and used this incident as being typical of that person then you would have to draw the conclusion that the film maker had little regard for the person.

Equally, Brian De Palma clearly has little regard for the United States or its terrific achievements over, especially, the last 100 years.

By making such a film, De Palma demonstrates that he is not only morally bankrupt but also a profound intellectual coward.

and a dickhead to boot.

“What would take courage is if De Palma produced a movie showing the good that had occurred in Iraq…the progress that the Iraqi people are making and the toll being inflicted upon Al Qaeda and its allies.”

I’m afraid that would hardly fill a 30 second spot never mind a full length feature film. A while back a film like that tried to show the good that had occurred in Vietnam, the progress the South Vietnamese were making and the toll being inflicted on the Viet Cong. The film was called The Green Berets, starring that heroic draft postponer, John Wayne. I heard that Netflix recently moved it out of the Action Film category and into Comedy.

“If someone made a movie about someone you loved…in which a youthful transgression was dealt with before a court and used this incident as being typical of that person then you would have to draw the conclusion that the film maker had little regard for the person.”

Ah yes, killing four filthy rag heads, raping and burning the body of a 14year old can have a way of messing up an otherwise potentially worthwhile life. De Palma should have more regard…

Note: The above assertion by Jack Lacton seems so bizarre, I doubt if I am interpreting it correctly by reading it exactly as written. Help me out here?

“Equally, Brian De Palma clearly has little regard for the United States or its terrific achievements over, especially, the last 100 years.”

Spoken like someone who has only the most chauvinistic grasp of US History. The past 100 years is far, far from spotless. For the sake of merciful brevity let us say merely that this country is pretty great in theory. The reality is another matter entirely.

I spent 20 years of my life living around the world - Japan, Egypt, England, USSR, USA, PNG, Burma, Kenya etc and have a little more than a chauvinistic grasp on US history.

Unlike today's so-called intellectuals I understand that all nations have their 'spots' and it's the overall scorecard that counts.

"...I understand that all nations have their 'spots' and it's the overall scorecard that counts."

I am appalled to hear that Redacted has even itself been redacted. As if it were possible to further destroy the identities of the poor, maimed, dead Iraqis whose faces formed the background of the end titles in Brian De Palma’s film, now add the redaction of their images entirely. Are the cost benefit analysts working for the pharmaceuticals, automobile manufactures and the tobacco companies the only ones with any sense of risk or courage anymore? I prefer to think this has less to do with protecting the producers from legal action or the Iraqis from humiliation and invasion of privacy, than a monumental cowardice when it comes to confronting of the American moviegoer with a little too much reality. De Palma’s initial acquiescence to the insurers forced him to abandon the use of any actual documentary footage in the body of the film. This has already resulted in the Right Wing warmongers accusing him of “making it all up” because he restaged rather than using the real footage. This colossal inability on their part to understand the difference between art and life is too outrageous to even deserve comment.

What this chronic failure of nerve on the part of underwriters will do to the future of actual documentary filmmaking I leave to cynical speculation. I am convinced however that eventually the entertainment industry, corporations and the insurance pencil pushers will so lobotomize the creative spirit in this country, that the only artists left in our culture will be members of the Britney Spears Ilk’s Club.

If you wish to see an unrepentant, unredacted piece of filmmaking that is not afraid of lawsuits and not afraid to show the real face of war, I recommend to you a moving three minute video on YouTube called “Kindertotenlied”.

I hope that when the producers, whose footage was stolen for use in this video, finally get around to suing little old filmmaker (me), they will learn exactly how much blood can be squeezed from a rock (as opposed to Iraq). Abject poverty, ah my foes and oh my friends, does have its privileges!

these actors are just as responsible for american deaths as al jazzhira. do they not know that thes films are used to recruit terrorist? Its getting really hard to keep track of the movies to boycott. is there a list somewhere?poor depalma is sad because theres not enough body bags coming home. would love to see the twit on the street.