Ken Gregory from Friends of Science summarises the work done by Ferenc Miskolczi demonstrating that the atmospheric greenhouse effect is controlled by water vapour content and that the system maintains equilibrium via this mechanism.

It's an important step to understanding why the predictions of the IPCC's computer models cannot possibly be correct.

UPDATE: Ken left a note saying that he'd updated his post with more information. The following includes the changes that wreck the models even more:

The paper,Greenhouse Effect in Semi-Transparent Planetary Atmospheres by Ferenc M. Miskolczi shows that the current greenhouse effect equations are incomplete because they do not include the correct boundary conditions. The new theory presented in Miskolczi's paper shows that the atmosphere maintains a “saturated” greenhouse effect, controlled by water vapor content.

There are no physics, no equations in the models that determines the strength of the GHE. Parameters are just set to obtain the observed temperature.

The GHE is dominated by water vapour, so how it changes with increasing CO2 is critical. All the General Circulation Models (GCM) or more commonly called Global Climate Models just set various evaporation and precipitation parameters to achieve approximately the result:

This result is based on short term observations of temperature changes while CO2 concentrations were approximately constant, so they only hold true over periods when CO2 does not change much. It is invalid to extrapolate these observations to long term periods with increasing CO2. The modellers just assume relative humidity is also constant while CO2 concentrations change.

There is no physics in support of this assumption, and no way to calculate its value from first principles. This assumption means that if temperatures increase for any reason, the amount of water vapour in the atmosphere increases. But water vapor is the most important greenhouse gas, so the GHE becomes stronger and temperatures increase more. The current theory does not determine this - it is only an assumption. If this assumption is only slightly wrong, it completely changes the expected response of increasing CO2 because water vapour is such a dominant greenhouse gas.

The new Miskolczi theory describes this missing greenhouse equilibrium mechanism. He shows that the classical theory does not include all the necessary energy constraints. When these constraints are included in a new theory, the strength of the GHE is determined analytically. The result shows that the Earth's atmosphere is maintained at a nearly saturated greenhouse effect. Detailed calculation show that the greenhouse sensitivity to a doubling CO2 is about 0.24 K.

Current theory is based on the energy balance assumption that the total out-going long wave-length radiation is equal to the net incoming short wave radiation (net of albedo).

The most important of Miskolczi's innovations are:

He uses Kirchhoff's law and the two energy balances (ground to lower atmosphere, upper atmosphere to space) to derive the result: The long wave upward radiation from the surface is limited to 1.5 times the short wave downward radiation from the Sun. This limits the temperature to very close the current temperature. Therefore, Miskolczi concludes that almost all of the global warming of the last century must have been due to changes of the Sun or albedo. The Earth’s atmosphere, satisfying the energy minimum principle, is configured to the most effective cooling of the planet with an equilibrium global average vertical temperature and moisture profile.

Miskolczi also provides empirical evidence of the two laws he applies (krichoff.s law and Virial Theorum) for both the Earth and Mars.

Miskolczi says "It is nonsense to think that a system ‘waits’ for our CO2-emissions to elevate its temperature if otherwise the energetic conditions make possible to rise and the necessary resort (a practically infinite reservoir of greenhouse gases in the form of water vapor in the oceans) is at its hands."

The new theory implies that adding CO2 to the atmosphere would reduce the relative humidity, contrary to climate model assumptions. So, has relative humidity been falling with increasing CO2 concentrations?

Here is a graph of global average annual relative humidity at various elevations in the atmosphere expressed in milli-bars (mb) from 300 mb to 700 mb for the period 1948 to 2007. The data is from the NOAA Earth System Research Laboratory here.
Global relative humidity 300 to 700 mb 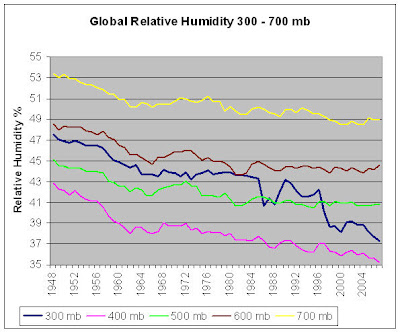 This graph shows that the relative humidity has been dropping, especially at higher elevations allowing more heat to escape to space. The curve labelled 300 mb is at about 9 km altitude, which is in the middle of the predicted (but missing) tropical troposphere hot-spot. This is the critical elevation as this is where radiation can start to escape without being recaptured. The average annual relative humidity at this altitude has declined by 21.5% from 1948 to 2007!

Existing computer models forecast that the warming trend due to increasing CO2 concentrations will be greater in the troposphere in the tropics than at the surface. The graph below from the International Panel on Climate Change (IPCC) Fourth Assessment Report (4AR) shows the predicted tropical troposphere hot-spot at 8 to 12 km altitude as a distinctive red area. The vertical right hand scale is altitude in km, and the left hand scale is atmospheric pressure in mb. The horizontal axis is latitude with the equator (Eq) in the middle. The colours represent the predicted warming trend in Celsius per decade based on the assumption that relative humidity is constant. 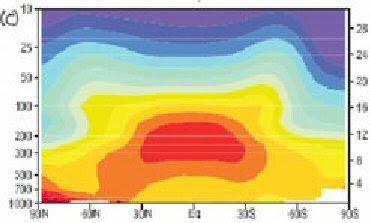 However, the Hadley Centre's real-world plot of radiosonde temperature observations shown below does not show the projected CO2 induced global warming hot-spot at all. The predicted hot-spot is entirely absent from the observational record.

A NASA study from here says:

A NASA-funded study found some climate models might be overestimating the amount of water vapor entering the atmosphere as the Earth warms. They found the increases in water vapor were not as high as many climate-forecasting computer models have assumed. In most computer models relative humidity tends to remain fixed at current levels. "The increases in water vapor with warmer temperatures are not large enough to maintain a constant relative humidity," Minschwaner said.

Dr. Roy Spencer’s article Global Warming and Nature’s Thermostat here, describes the role of precipitation systems in controlling the greenhouse effect. It is an extension of Richard Lindzen’s “Infrared Iris” hypothesis. Dr. Spencer says we don’t know why the greenhouse effect is limited to its current value.

Miskolczi provides the detailed explanation of why the greenhouse effect is limited to its current value for a constant external Sun forcing. Adding CO2 to the atmosphere just replaces an equivalent amount of water vapour to maintain a constant greenhouse effect. This would have negligible effect on global temperatures.

The global warming the Earth has experienced over the twentieth century is mostly due to the Sun, including the Sun’s effects on clouds via cosmic rays. Increasing Sun activity adds to the greenhouse effect by increasing the specific humidity; increasing CO2 concentration in the atmosphere does not. The actual 20th century warming results may be considered the sum of two processes:

1. An increase of the Sun's radiation input net of albedo with no change in CO2 concentrations would cause no change to relative humidity. Global temperatures would increase causing an increase in specific humidity with the greenhouse effect (in W/m2) increasing by one-half of the solar input change (also in W/m2).

2. An increase of CO2 with constant net solar radiation causes relative humidity to fall, especially at the 400 mb and 300 mb level, as this is at the characteristic emission level. Changes of humidity near the surface has little effect on the strength of the greenhouse effect as the high water vapor content already captures most of the long wave-length radiation, so relative humidity would not change much near the surface. The CO2 replaces water vapour to maintain a constant greenhouse effect, so global temperature changes would be negligible.

The sum of these two process describe the 20th century warming results. Specific humidity has increased at lower altitudes, but has decreased at high altitudes. The decreasing relative humidity (especially at 300 and 400 mb levels) almost totally offsets the GHE of increasing CO2 content. The warming was caused by the increased solar forcing amplified by a positive water vapour feedback.

The Sun has recently become quiet resulting in declining global temperatures since 2002 despite increasing CO2 content in the atmosphere.

A summary of the Miskolczi theory is here.
A four part critique by David Stockwell is here.

Proving that water vapour keeps the system in check kills climate science as we know it dead. so expect to see a strident attack on Miskolczi and his theories over the next month or two from the usual suspects such as Realclimate, James Hansen and other assorted ninnies whose snouts are firmly planted in the bucket of public money that supports climate research.

Could you kindly reload this article from the Friends of Science website. I make some minor corrections, as well as added a more detailed explanation of how the theory applies to the actual 20th century warming.

Only someone who hadn't read it could possibly think that Ferenc Miskolczi's utterly worthless paper 'kills climate science as we know it dead'. It's amusing to see how obviously desperate you are for global warming to be somehow dismissed. I think you actually have a phobia.

"Reid A. Bryson holds the 30th PhD in Meteorology granted in the history of American education. Emeritus Professor and founding chairman of the University of Wisconsin Department of Meteorology—now the Department of Oceanic and Atmospheric Sciences—in the 1970s he became the first director of what’s now the UW’s Gaylord Nelson Institute of Environmental Studies. He’s a member of the United Nations Global 500 Roll of Honor—created, the U.N. says, to recognize “outstanding achievements in the protection and improvement of the environment.” He has authored five books and more than 230 other publications and was identified by the British Institute of Geographers as the most frequently cited climatologist in the world" and he is a global warming skeptic.

Read his works "anomymous" you might find it interesting.

Thanks for the info about humidity falling. It was just what I needed. I've used the link to your page here http://joannenova.com.au/2008/10/30/agw-is-a-religion/#comments

Good to see another Australian skeptic.

There is no such thing as an "atmospheric greenhouse effect". There can be no NETT radiation from a cool atmosphere to a warmer earth.

Gases in the atmosphere absorb incoming solar radiation as well as the small amount of radiation from the earth surface. This is sufficient to keep the planet warmer than a body with no atmosphere.

Some things about the Apple Watch you probably already know. The Apple Watch Sport, for example, doesn’t offer the same sapphire display as the Watch Edition or stainless steel models.